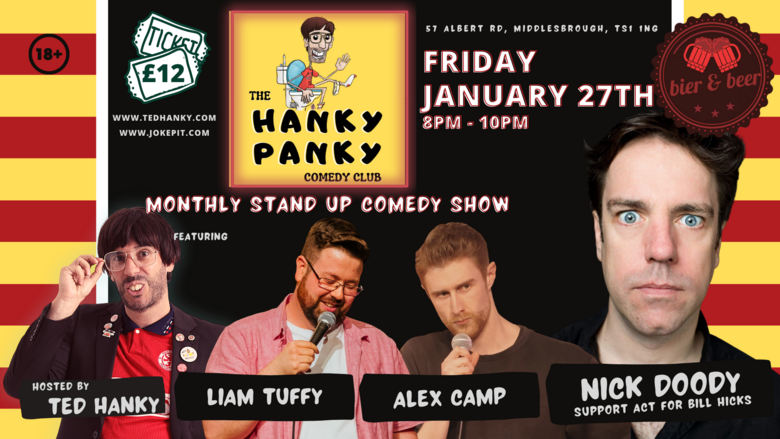 Join Ted Hanky (not the darts wrong un) & Friends at The Hanky Panky Comedy Club at Bier & Beer bar in Middlesbrough every month for a proper mint night of stand up comedy.

Headlined by the brilliant


Nick Doody has been performing comedy since the 90s when, as a student, he got off to a pretty good start by supporting the legendary Bill Hicks, at Bill's request. A little later, Nick was a finalist in Channel 4's So You Think You're Funny? competition.

Since then he has performed all over the world: Ireland, France, Spain, Switzerland, Germany, The Netherlands, Dubai, United Arab Emirates, Qatar, Hong Kong, Thailand, Malaysia, Estonia... You get the idea. He was the first British comedian to perform in Croatia.

Nick has appeared on various radio and TV shows (listed below), and is also much in demand as a writer. He has penned jokes for Joan Rivers, Lenny Henry, Dame Edna Everage and an uncomfortable number of Mock The Week regulars. He was also the creator and head writer of Bigipedia, a critically acclaimed Radio 4 show that broadcast in 2009 and 2011. Click here for more info on Nick as a writer.

In 2006, Nick performed his first solo Edinburgh Festival show, Before He Kills Again. The show received rave reviews and sold out for the whole festival, leading to a run at the Soho Theatre. Since then, Nick has written and performed another ten solo hours of stand-up.

Opening the show is Liverpool Comedian

"Ted Hanky is the Salvador Dali of comedy, hilariously bizarre to watch, a wonderfully daft character and will have you giggling all the way back to his allotment... Hilarious!"
- The Laughing Pug Comedy Club

Open from 6pm, get down early to grab your seats and take full advantage of the fantastic drinks available.

The bar stays open late after the show for drinks and BANGING tunes!!

Tickets are £12 (plus booking fee)

Bar is open from 6pm / Show starts bang on 8pm.

NB: Line up's can be subject to change at very late notice.

SORRY NO REFUNDS - Tickets may be transferred to a future night at the organisers discretion
If we are instructed by the local council or government to cancel or postpone due the event due to Covid then refunds or ticket roll overs will be offered.

Please note, we cannot refund the 10% booking fee added by the ticket seller.