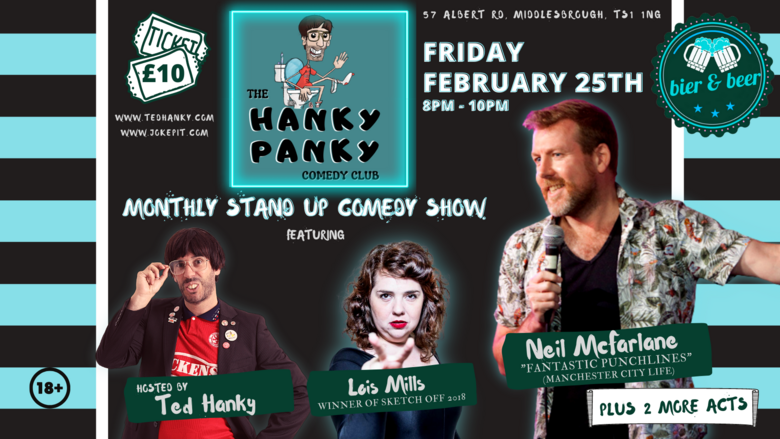 Neil started his comedy career in Scotland 16 years ago, where he remains a regular act at the highly-regarded Stand Comedy Clubs in Glasgow & Edinburgh.

He now performs in locations across the length and breadth of the British Isles, attracting widespread concern, and has also entertained international audiences in places as far-flung as Tenerife, Croatia, Serbia, Slovenia, Romania, the Czech Republic, the two Channel Islands you can actually get to, Florida, California and Kent.

Neil reached the Scottish regional final of the BBC New Comedy Awards in 2001, so technically that means he's been on the telly (for the 7 people who had BBC CHOICE at the time).

In 2006 Neil came third in the Scottish Comedian of the Year competition and performed his first, sold-out, one-man show, 'Posh Glaswegian', at the Glasgow International Comedy Festival, followed by his first full run in the Gilded Balloon at the Edinburgh Fringe; and his first solo show outside Scotland, at the Manchester Comedy Festival.

In 2012 Neil was a finalist in Jongleurs Comic Idol competition.  He also wrote and performed his solo show "Sightseeing With A Hangover" at the Edinburgh Festival in August 2016
Allow him gently to divert you from the horrific truth of your own existential plight and occasionally use the word 'seepage'.

"A clear ability to craft a gag." CHORTLE

Winner of Sketch off 2018, Lois Mills is a one woman sketch group.

Using a mixture of puppetry, video and good old fashioned theatre, Lois will take you on a journey which will conclude with you thinking "Yep, she is a weirdo".

“The decidedly strange Lois Mills, who started off weird and… got weirder" -Bruce Dessau for Beyond The Joke


Plus two more acts TBA in the middle section!

Tickets are £10 each
PODCAST PATRONS RECEIVE A DISOCOUNT

Bar is open from 6:30pm / Show starts bang on 8pm.Please show your ticket on your phone upon arrival
(Don't print - help the environment n'tha)

NB: Line up's can be subject to change at very late notice. SORRY NO REFUNDS - Tickets may be transferred to a future night at the organisers discretion
If we are instructed by the local council or government to cancel or postpone due the event due to Covid then refunds or ticket roll overs will be offered. Please note, we cannot refund the 10% booking fee added by the ticket seller.
The night will contain bad language and topics of an adult nature .... if you are easily offended - give it a swerve like ;)

Display your ticket/s upon arrival, we'll email them to you. This ticket is for one person.
Please check the ticket listing for any covid related restrictions.

SORRY NO REFUNDS - Tickets may be transferred to a future night at the organisers discretion
If we are instructed by the local council or government to cancel or postpone due the event due to Covid then refunds or ticket roll overs will be offered. Please note, we cannot refund the 10% booking fee added by the ticket seller.

Cracking night out, great entertainment and superb value! Sign me up for a membership.

We had a great night from start to finish.