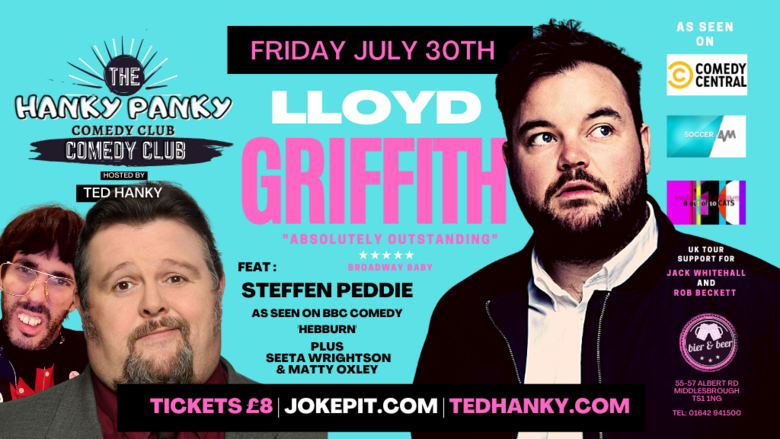 LLOYD GRIFFITH
Lloyd Griffith is a comedian, a choirboy and an ‘aspiring’ goalkeeper.
You may have seen him most recently in Ted Lasso (Apple TV), It’s A Sin (Channel 4), House of Games (BBC 2), Not Going Out (BBC 1) & Jonathan Ross’ Comedy Club (ITV).

Lloyd also fronted a documentary on BBC called ‘Can You Beat The Bookies?’ which received rave reviews. He was also co-host of Soccer AM on Sky Sports and was co-host of FLINCH on Netflix.

He recently supported Jack Whitehall on his UK arena tour and had previous supported Rob Beckett on his UK tour.
Lloyd has just announced his rescheduled dates for his most recent show ‘Not Just A Pretty Face’. You can buy tickets below…

A former pro wrestler and an original member of Newcastle Upon Tyne’s Near The Knuckle team with such luminaries as Anvil Springstein, Vladamir McTavish, Gavin Webster and Ross Noble, he brings a different approach to whatever venue he performs at.With Ross Noble, the two wrote and performed sketches on ITV’s Children’s Saturday Morning Show Gimme 5 for a season as well as doing a health and fitness show called Burst! for ITV as well as numerous regional shows in the North East.
"A fresh Geordie talent." - Metro

plus a middle  sets from

NB: Line up's can be subject to change at very late notice. If we are instructed by the local council or government to cancel or postpone due the event due to Covid then refunds or ticket roll overs will be offered. Please note, we cannot refund the 10% booking fee added by the ticket seller.

This event is sold out.