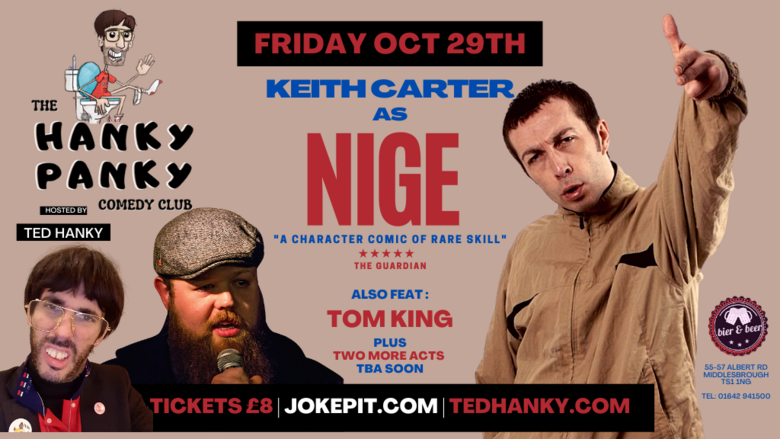 This event is cancelled

Keith Carter as NIGE
Keith Carter is a renowned for being one of the best character comedians on the UK circuit today, performing as his comic creation ‘Nige’.
Carter has a unique delivery and can mix audience interaction along with full on hilarious stories as well as well-crafted gags.
Nige has now become a comedy icon in his home city of birth Liverpool and is widely received by comedy piers alike, including Johnny Vegas & Jon Richardson.
Nige has worked with some of the biggest names in stand –up including Russell Brand, Sean Lock, Ricky Gervais and Reginald D Hunter and can often be seen performing overseas as-well as all the major UK comedy clubs.


"A character comic of rare skill" - The Guardian


"Carter is in danger of becoming huge" - Chortle

Opening the show is

The slightly surrealist and self proclaimed 'Monarch of Mirth' Tom King  marries inventive daftness, a skewed wit and a flair for inventive wordplay that leads to very funny pay-offs.

"His routines provoke reactions that range from queasiness to hilarity. " -  broadwaybaby

"Lives up to his name as monarch of mirth" - Derbyshire Times

Runner up Harrogate Comedian of the Year 2019


plus a middle sets from

Tickets are £8 eachOver 18's OnlyBar is open from 6:30pm / Show starts bang on 8pm.Please show your ticket on your phone upon arrival
(Don't print - help the environment)