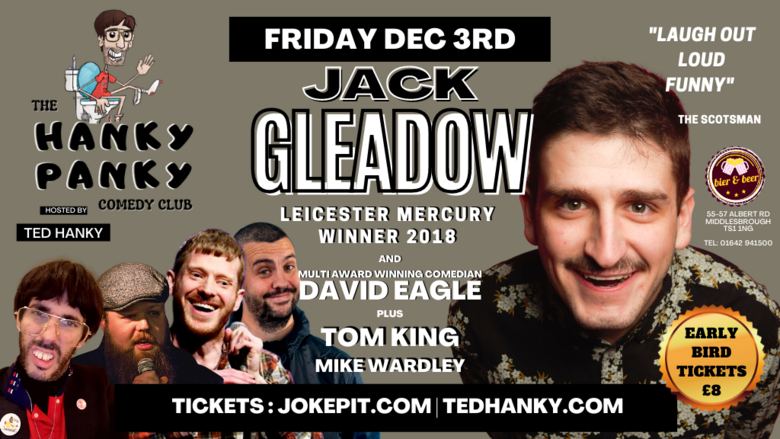 LEICESTER MERCURY Comedian of The Year 2018


Jack is one of the most sought after acts on the circuit with his one man variety show style performing regularly at clubs such as Glee, Manfords, and Just the Tonic. Jack has also supported Lloyd Griffith on tour and performed in front of 3,500 people at Latitude's main comedy arena.

Opening the show is

plus a middle sets from

The slightly surrealist Tom King marries inventive daftness, a skewed wit and a flair for inventive wordplay that leads to very funny pay-offs.


"His routines provoke reactions that range from queasiness to hilarity. " - BroadwayBaby

"Lives up to his name as monarch of mirth" - Derbyshire Times


Runner up Harrogate Comedian of the Year 2019


And a shorter set from up and coming new comedian

Early Bird Tickets are £8 each - rising to £12 from November 15thOver 18's OnlyBar is open from 6:30pm / Show starts bang on 8pm.Please show your ticket on your phone upon arrival
(Don't print - help the environment)

Cracking night out, great entertainment and superb value! Sign me up for a membership.