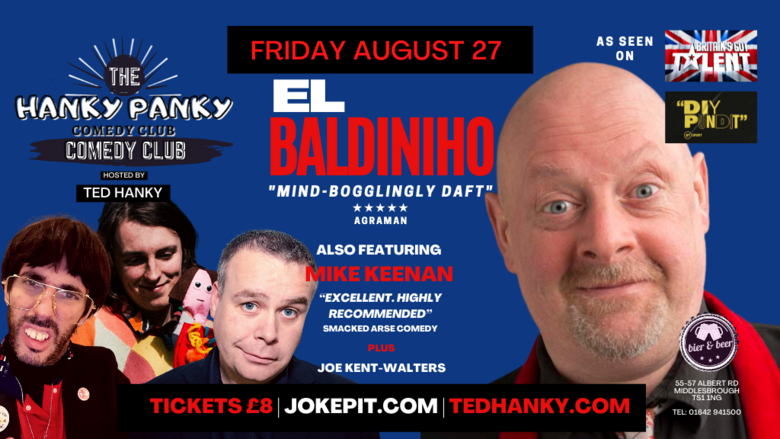 EL BALDINIHO
The Great El Baldiniho is a magician and prop comedian performing on TV, in comedy clubs , at festivals and at corporate events across the UK and beyond.

He can also be seen headlining family friendly comedy events at The Comedy Store , Up The Creek and The Frog and Bucket.
He regularly appears at Glee  Comedy Clubs , and is booked by national comedy agencies such as Off The Kerb and Live Nation


“El Baldiniho had the best joke of the night“ Steve Bennett , Chortle


“One of the funniest things I’ve seen” Rich Hall, Comedian


“As ever, El Baldiniho was brilliant” Up The Creek Comedy Club


With over 300K YouTube views and a growing social media profile , El Baldiniho is one to watch

Warrington based comedian who is Bold, Rude, Political and Clever… A joy to watch!


plus a middle set from

This young man is taking the scene by storm with his alternative style and zany characters. Prepare yourself!


"If Rik Mayall and Reece Shearsmith had a love a child, it would be Joe Kent-Walters.... Brilliant!"
- Shoe Cake Comedy


MCing the night is Middlesbrough's very own ....

Tickets are £8 eachOver 18's OnlyBar is open from 6pm / Show starts bang on 8pm.Please show your ticket on your phone upon arrival
(Don't print - help the environment)

NB: Line up's can be subject to change at very late notice. If we are instructed by the local council or government to cancel or postpone due the event due to Covid then refunds or ticket roll overs will be offered. Please note, we cannot refund the 10% booking fee added by the ticket seller.

Display your ticket/s upon arrival, we'll email them to you. This ticket is for one person.
Please check the ticket listing for any covid related restrictions.
Enjoy the show.