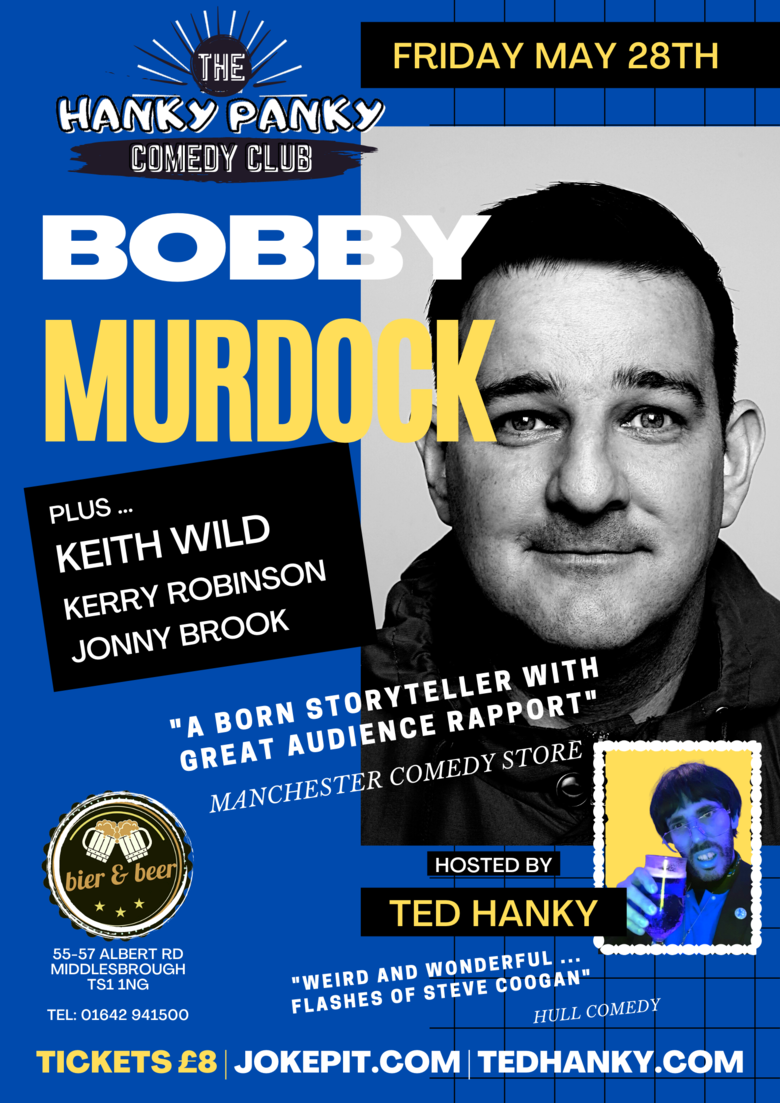 ** LIMITED TICKETS **THOSE WHO HAVE TICKETS THAT ROLLED OVER FROM THE CANCELLED OCTOBER & NOVEMBER SHOWS WILL BE CONTACTED BEFORE ALL REMAINING TICKETS GO ON GENERAL SALE!

Bobby is instantly likeable, a master of short stories and silly jokes with a gifted ability to take you on the journey with him.Bobby has great variation with witty one liners and some amazing funny stories.
"A born storyteller with great audience rapport"
- Manchester Comedy Store

Self proclaimed 'sexy twig' Keith Wild brings his very funny (and often rude) songs to the Hanky Panky Comedy stage for the first time..... and you are going to love him!

“Whilst some guitar acts hide behind their instruments, Keith absolutely utilises his as a weapon of mirth.
His songs, audience interaction and cheekiness never fail to get the audience singing along and, more importantly, pissing themselves laughing"
- The Comedy Station, Blackpool

We also have shorter sets from

"The greatest comedy discovery of this year"
- Mandy Knight


MCing the night is Middlesbrough's very own ....

A local favourite, Ted and has featured many times on Boro Fan TV, BBC Radio Tees, The Tyne Tees News, BBC Radio Leeds, Neil Warnock's CCTV .... and Babestation!
You may have also listened to Ted's hit podcast 'Ted Talks - The Ted Hanky Podcast'? ... If not ... why not?


PLEASE READ:
Due to social distancing guidance there will be limited tickets available for this, snap them up early!
Rule of Six will be in operation and all seating is spaced accordingly with social distancing rules.
Please act sensibly and safely when attending the night.Drinks will be table service only!
Open from 5pm, get down early to grab your seats and take full advantage of the fantastic drinks available.

NB: Line up's can be subject to change at very late notice. If we are instructed by the local council or government to cancel or postpone the event then refunds or ticket roll overs will be offered. Please note, we cannot refund the 10% booking fee added by the ticket seller.

Display your ticket/s upon arrival, we'll email them to you. This ticket is for one person.
Please only attend this event if following the rule of six.
Enjoy the show.