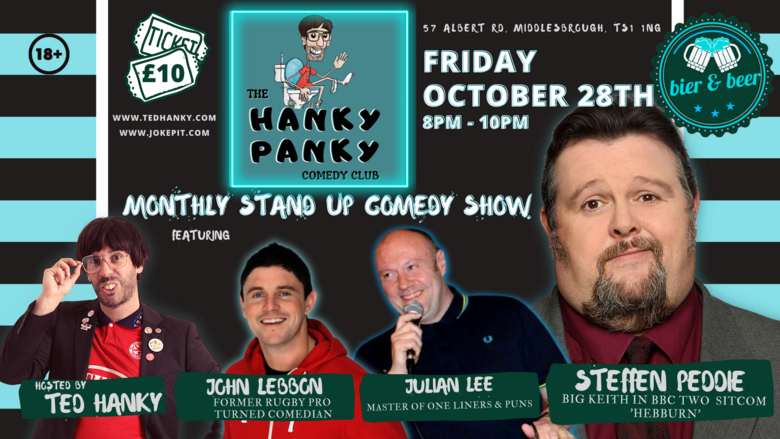 This month we welcome back top headliner and Hanky Panky Favourite .....

STEFFEN PEDDIE
Fondly known as The Big Man of Northern Comedy, Steffen is famous for playing Big Keith in BBC2’s hit comedy sitcom Hebburn.Returning to stand up after an eight year break as a Pro Wrestler has found Steffen a little older, wiser and bigger than before, but still ready to find the lighter side of any subject that an audience member can throw at him. Prior to his time away Steffen had been performing for several years in the North of England.An original member of Newcastle Upon Tyne’s Near The Knuckle team with such luminaries as Anvil Springstein, Vladamir McTavish, Gavin Webster and Ross Noble, he brings a different approach to whatever venue he performs at.With Ross Noble, the two wrote and performed sketches on ITV’s Children’s Saturday Morning Show Gimme 5 for a season as well as doing a health and fitness show called Burst! for ITV as well as numerous regional shows in the North East.
"A fresh Geordie talent." - METRO
"One of the North East's best comedy comperes" - NEWCASTLE EVENING CHRONICLE
"Steffen Peddie, the worlds Greatest Comedian, Wrestler, Scout Leader and fantasist of his generation" - ANVIL SPRINGSTEIN

Few changes to the line up .... Dan Tiernan and Michael Mannion won't be joining us .... instead we've got
Opening Act ....

Newcastle act who's a Master of one liners and puns."He's got jokes that make me hurt laughing" - Jason Cook (pro comic, writer of Hebburn and Murder On The Blackpool Express)

Another brilliant night even if I didn't win the competition 🤣