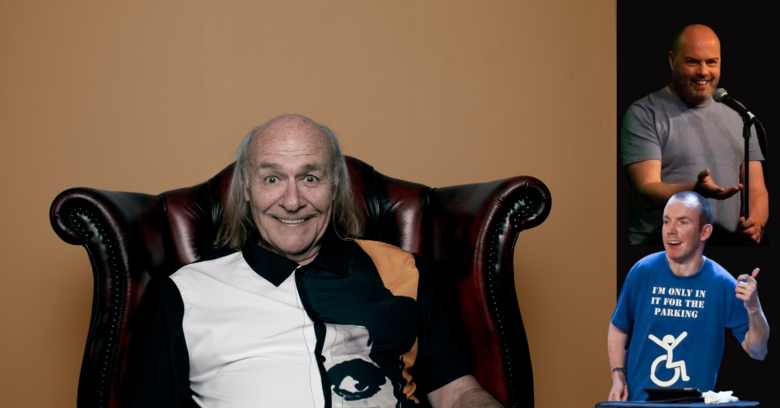 
Mick Miller is often refered to as a comedy legend, a term which he finds difficult to accept, because those that know him will tell you that he is a modest, unassuming “normal” bloke. It’s when he’s on stage in front of an audience that he comes to life.


He is often refered to as “The bald guy with the log hair” and that unusual hairstyle has been his trademark since he started in comedy in the mid 1970’s. Amazingly, when he recently appeared in the ITV series, “Last Laugh in Vegas”, the American show producer told him to get his hair cut, which started the Twitter #SaveMickMillersHair campaign.


He learned his trade as a Pontin’s Bluecoat and has many fond memories of those days. After Pontin’s he worked hard in the UK working men’s clubs, where he work hard on his act and eventually got his big break on the ITV Talent show, “New Faces” where he won his heat. After that, he became a regular on the iconic TV show, “The Comedians” and the rest is history. He became a regular on our screens and continues performing live all over the world.


In 2011, Peter Kay asked for Mick to appear on the Royal Variety Performance that he was hosting. When the show was televised, Mick was trending worldwide at number one on twitter. He has appeared as Johnny Vegas’ father in the BBC 3 sitcom, “IDEAL” and also featured in an episode of “Peter Kay’s Car Share”. “I’ve loved every minute of my career” says Mick, “but one of the highlights has to be performing in Las Vegas. It completed the holy trinity of showbiz for me. I have now performed at The London Palladium, The Royal Variety Show and finally, Las Vegas.”


Comedy has evolved over the years and so has Mick Miller. He is equally at home entertaining on board cruise ships, performing at Corporate Functions, Theatres, Cabaret Clubs and the new style Comedy Clubs.

Following the unprecedented success of his appearance on the final of Britain’s Got Talent 2018, BBC New Comedy Award winner and star and writer of BBC Radio 4’s comedy series, Ability, Lee Ridley (aka Lost Voice Guy) is setting out on a tour of the UK.

He may not be able to talk but he definitely has something to say and his comedy will leave you speechless.

As well as winning Britain’s Got Talent this year (the first comedian to do so), Lee also won the BBC New Comedy Award in 2014 and his TV and Radio credits have included The One Show (BBC One), Voice Of The People (BBC Three), BBC At The Edinburgh Festivals (BBC iPlayer). Ability – the Radio 4 series that Lee stars in and co-wrote with Katherine Jakeways – has just been recommissioned for a second series.

Undeniably one of the North East’s finest comedic exports of recent years, Teesside-based comic Fran Garrity kicked off his comedy career in 2015 after becoming a finalist in the City Comedian of the Year & FAF Breakthrough Act.

Often heard on the airwaves of both national and regional radio, Fran has featured on such shows as BBC Radio 4’s New Comedy Awards and BBC Radio Newcastle’s features Jesting About and Grin up North.

2017 saw Fran chosen for a support slot with Jason Manford on his Muddle Class Tour and later that year he debuted his solo show Secret Agent Fran and became a finalist in the Harrogate Comedian of the Year.

He had a sell-out run for Best In Class at the 2019 Edinburgh Fringe Festival with his show Faith, Hope & Garrity.

Sam was brilliant , quick witted and used the crowd well. Highly recommend he and the support acts , all in all a cracking night of comedy

Absolute brilliant night, the comedians were spot on, 6 of us tried this night for the 1st time and we will definitely be going to more

Great night and atmosphere, will return and recommend!