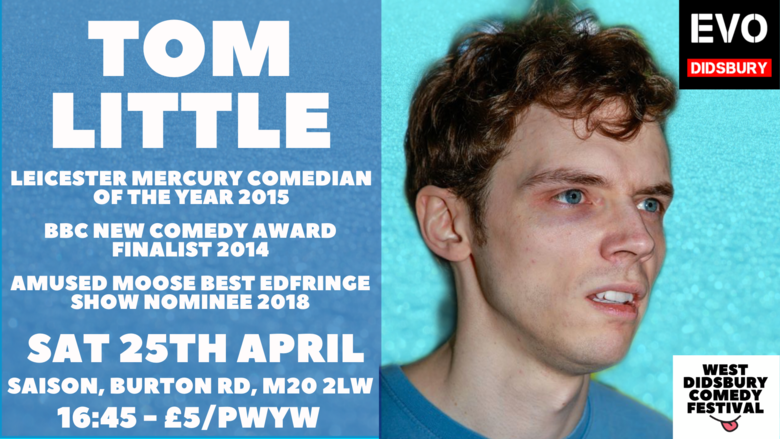 Tom Little Gets Good Reviews So Prepare To Be Impressed

Tom Little once won the Leicester Mercury Comedian of the Year (an award also won by acts like Johnny Vegas, Jason Manford and Romesh Ranganathan) and never stopped going on about it. He was also once nominated for the Amused Moose Comedy Award and mentions that a lot too.

Apparently he’s ‘the real deal; an instinctive comedian’ (The Spectator) with ‘excellent joke writing’ (The Scotsman) who ‘can’t remain a hidden treasure for long’ (Chortle). He manages to be ‘stupid but literate at the same time’ (Beyond The Joke) with a ‘brilliant, loudly awkward set’ (Gigglebeats) ‘enlivened by his leftfield charisma’ (The Wee Review). ‘Truthfully an hour with Tom Little almost isn’t enough (Fringe Review). So there.

This show is just an hour of jokes and stuff like that. There’s almost certainly going to be material about dolphins, vampires, embarrassment, dentists, Eminem, daylight savings time, dogs, fruit, other foods, and probably one pun. There might be a bit about Argos catalogues and a bit about public nudity but that isn’t set in stone. Either way, it should be good. Hopefully.

LEICESTER MERCURY COMEDIAN OF THE YEAR 2015

Show your e-ticket and get ready to discover a new favourite comedian.