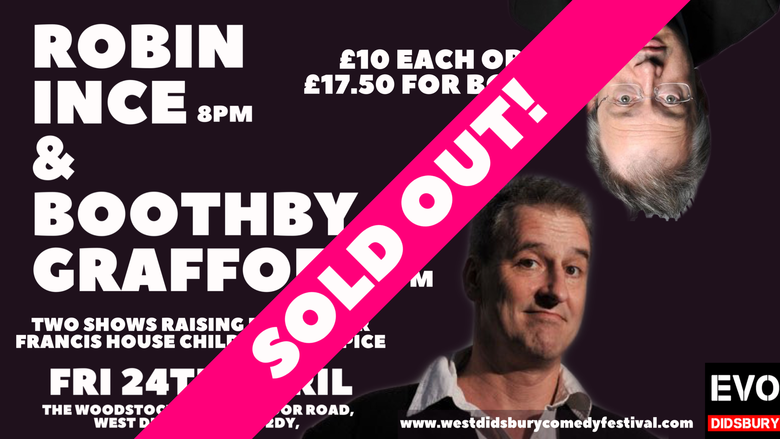 Talk about spoiling you! Two of the absolute best in the business for one outstanding night of stand up in aid of Francis House Children’s Hospice.

Join us for the whole night with this amazing ticket deal and quite probably laugh like you have never laughed before!

Possibly the funniest & most entertaining man on or off the planet.

‘More musical than most musicians, and funnier than most comedians.’
STEWART LEE

‘Graffoe seems to have a comedic Midas touch.’
THREE WEEKS

‘If I had to compare him to anyone, it would be Spike Milligan.’
OMID DJALILI

Robin Ince is many things. A comedian, an author, a broadcaster and a populariser of scientific ideas. The Guardian once declared him a ‘becardiganed polymath’ which seems about right.

He is probably best known as the co-host of the Sony Gold Award winning BBC Radio 4 series The Infinite Monkey Cage with Professor Brian Cox. He also co-hosts the podcast Robin and Josie’s Book Shambles, which gains over 100,000 listeners a month, which is part of The Cosmic Shambles Network, which he also co-created.

As a stand up he has toured the world and won three Chortle Awards, the Time Out Outstanding Achievement Award and was nominated for the British Comedy Awards Best Live show.

“When someone writes a history of modern comedy, they should make room for Robin Ince” THE GUARDIAN

“The Ince brain is like a black hole in a galaxy of knowledge. When it collides with another black hole – say the Fringe – the energy waves that are produced are perceived, by us, as “shows”. **** THE SCOTSMAN