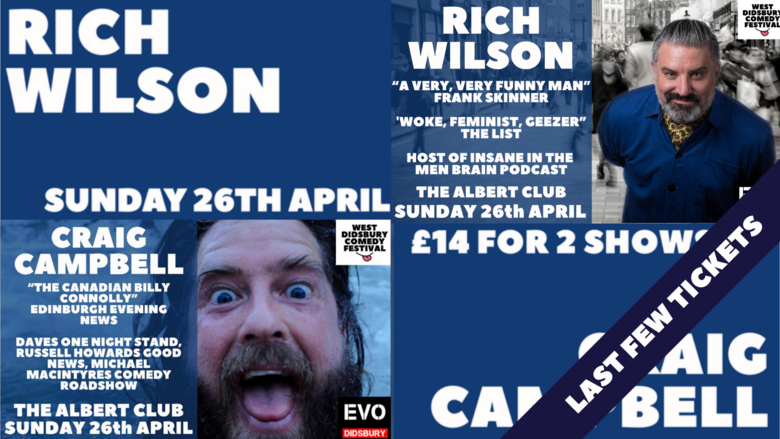 RICH WILSON & CRAIG CAMPBELL present 2 one man shows for a feast of riotous comedy at The Albert Club.

International comedian Rich Wilson is one of the countries finest comedians and popularly regarded as the UK’s best MC’s by many top comedians, such as Frank Skinner, Richard Herring and Sarah Millican.

Canadian Craig Campbell Currently is a formidable stand-up and one of the most charismatic and inventive performers around. He has performed on Michael McIntyre’s Comedy Roadshow (BBC One), Russell Howard’s Good News (BBC Three) and was responsible for easing the contractions of an expectant mother who laughed so hard at his performance on Dave’s One Night Stand (Dave) – which detailed an encounter with a badger – that her waters broke.

“One of the finest comedians in the country, no the world, a well traveled genius” RUSSELL HOWARD

“One of the most skilled storytellers and jokesmiths on the circuit... Craig is simply a very, very funny man”
CHORTLE

Doors will open at around 4pm with Rich Wilson on stage at 5pm. Craig Campbell on stage 6:30pm.

Show your eticket on arrival, grab a drink from the bar and enjoy!