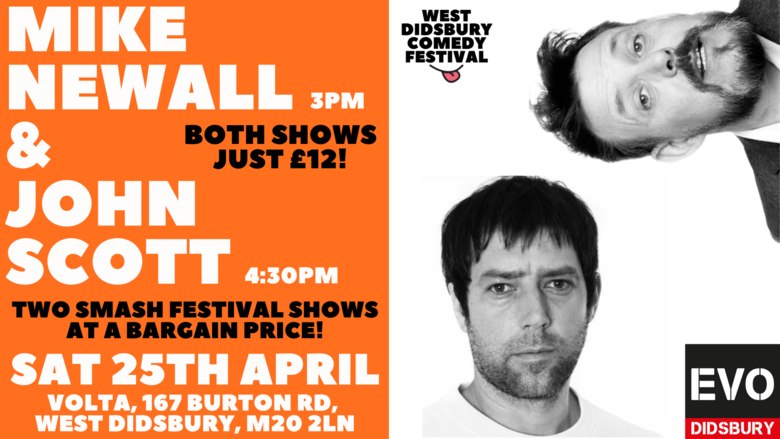 DOUBLE FESTIVAL SHOW FOR THE BARGAIN PRICE OF £12!

Catch these 2 amazing comedians for a superb afternoon of stand up at Volta in West Didsbury. Both are bringing their smash festival shows to our festival.

"I can’t believe I hadn’t thought of this title before. Having to move back home at 36 and "start again", maybe this is the right time."

Mike Newall is a rising star of the circuit, having supported the likes of Alun Cochrane on his UK tour. A gentle, amiable power-house of a comic, Mike’s timing is the envy of performers with ten times the experience and is living proof that you can’t learn to be funny, some people just are. Since making his debut in 2003, he has toured the country honing his skills and is now a force to be reckoned with. A talent who audiences, colleagues and industry-types alike are really sitting up and taking notice of, Mike Newall is the future of the Manchester scene, as cheering crowds from Penzance to Inverness will happily testify.

Misdiagnosed with schizophrenia aged 25, then re diagnosed as Bipolar 5 years later because he'd become a comedian. This is the story of that journey. A candid and frequently hilarious look at the more serious side of mental health.

John Scott is a comedian with 20 years experience in the game.

Warm up for Stewart Lee, Frankie Boyle, Tom Stade and many more.

"Among the top 5 comedians to emerge from Scotland." THE OBSERVER.
"Literally had people in tears of laughter" EDINBURGH EVENING NEWS.
"Possibly the funniest Scotsman alive" 100% BIKER.
"The highlight of the evening" ADELAIDE ROCKS.

Show your eticket at the door and enjoy 2 shows! Seating is not reserved. Upstairs venue with no lift so access may be difficult for some sorry.