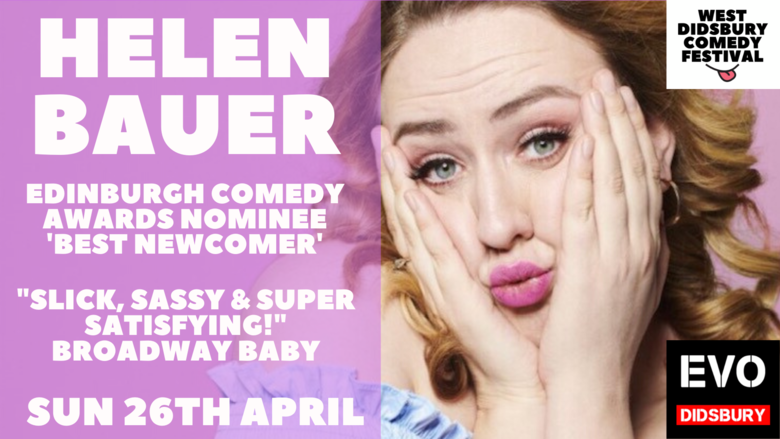 Describing HELEN BAUER as one to watch is a little bit of an understatement! The 2019 Best Newcomer Nominee is on top form and brings an hour show to the West Didsbury Comedy Festival. Set for the top, come and see her at the festival so that you can brag to your mates for years to come!

As seen and heard on BBC Radio 4, BBC Three and Comedy Central Online. In 2018, Helen headed to the Edinburgh Festival as part of the prestigious Pleasance Comedy Reserve. She is also a writer and performer for thehookmag.com.

After leaving college with an E in Economics and an allergy to the education system, Helen Bauer moved to London to share a bed with her cousin and work in Accessorize on Oxford Street. She lived in London until she was 23, making sketches, waitressing and drinking. She then moved to Berlin to do the same there, and discovered stand up.

Helen honed her comedy skills, performing in English, to confused Berlin locals. You can now find Helen’s creative writing, charming attitude on stage and special love of pop music all over London. Helen was runner up in the Max Turner Prize 2017, a Semi Finalist in So You Think You’re Funny 2016 and Regional Finalist in Funny Women 2017.

As featured in Stylist Magazine’s ‘Edinburgh Shows to See’.

“I don’t think I stopped laughing for the entire half hour Helen was on stage. An incredibly likeable comic who takes anecdotal comedy to another level.” Funny Women

Doors 6:30pm. Show 7pm. Another show follows this one and you will be asked to head to another area of the venue as the show closes.

Please bring your e-ticket with you - on your phone is fine. Get ready for a humdinger!