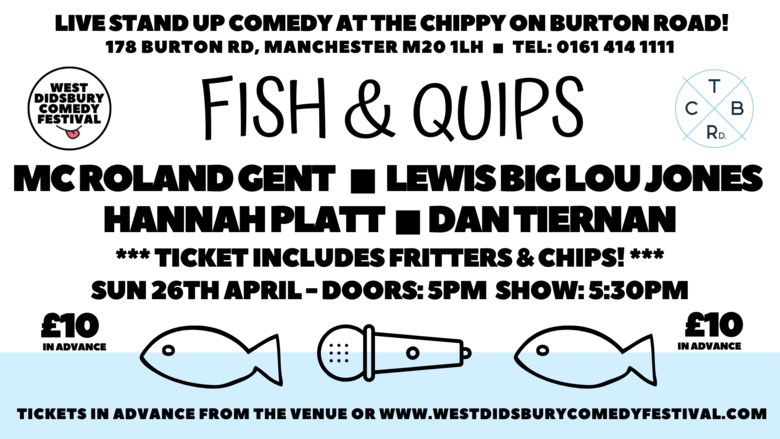 Well this doesn't happen everyday - A live stand up comedy show in a fish & chip shop!

The Chippy On Burton Road join in the West Didsbury Comedy Festival fun with a live stand up show featuring 4 superb local comedians and fritters and chips are INCLUDED!

MC is Roland Gent (who runs the Art of Tea comedy night on Barlow Moor Road). He is a multiple award winning comedian and enjoys his chips with gravy.

Lewis Big Lou Jones is a well known face on the circuit playing all the major clubs and scooping up awards like chips along the way. He is very keen on fish and chips, as well as many other takeaways.

Dan Tiernan from Didsbury has proven to be a big hit despite being relatively new. Hi tales of over coming life's adversaries are a hit with audiences far and wide. He enjoys battered cod.

Hannah Platt was a finalist at BBC New Comedian of the Year 2019, and is undoubtedly a rising star! 'Dark, damaged and hilarious' Josie Long.
'A voice of a new generation'...'she clearly captures a disaffected youth and world-weariness far beyond her years' The Skinny. Hannah demands mushy peas, with every fish & chip shop order.

With a small tight intimate gig we aren't expecting tickets to be around for long - especially as fritters and chips are INCLUDED and they serve alcohol!

Tickets available on line or from the venue.

I even resisted fish puns all the way through that!

Show your ticket upon arrival, sit back, relax, eat chips and fritters, laugh!