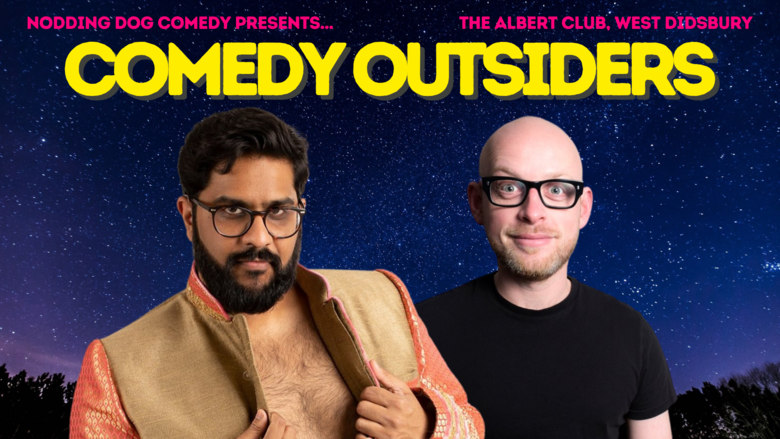 Prepare for huge names from the world of stand up, at our very special alfresco comedy club nights, EVERY Wednesday in August!

ESHAAN AKBAR
Undeniably charming with impeccable comic timing, Eshaan Akbar is creating a name for himself as a brilliant comedian. A former banker, civil servant and Bollywood dance choreographer, Eshaan's comedy career has seen him support Dane Baptiste on a UK tour and make appearances on Mock the Week, Frankie Boyle's New World Order and The Now Show.

"His comedy is reflective, relevant, political, observational, relatable and, above all, it is laugh out loud hilarious."
★★★★★ Edinburgh Festivals Magazine

DAN NIGHTINGALE
Fresh out of University in the early Noughties, Dan started working behind the bar in a local comedy club and already the seeds for his future career where sown. He took to the stage for the first time only a few months later and found himself catapulted to the forefront of the comedy scene. One of stand-ups brightest stars. a natural on stage, a total original and one of comedy's most exciting secrets. Dan combines cutting observation with his natural playfulness, raucous banter with beautiful surrealness, and great gags with heart felt ramblings. His comedy is genuine, creative, honest, unpredictable, original and above all… funny as hell.

A former Manchester Comedian of the Year, Jamie Hutchinson is certainly one to watch. A unique comedic voice!
CERYS NELMES
Cerys Nelmes is a fabulous stand up comedian from the West Country. She performs her comedy in a story telling style with a genuine warmth that is easy to like!  TV warm up for some huge shows and recently as seen on Casualty!

So grab your tickets, grab your picnic blankets, grab your brolly (just in case), grab your wood fired pizza when you get here too... and don't miss out on one of the most popular events on the West Didsbury calendar!

Age Restrictions:
Over 18's only

To keep you, our team and comedians comfortable please note the following: