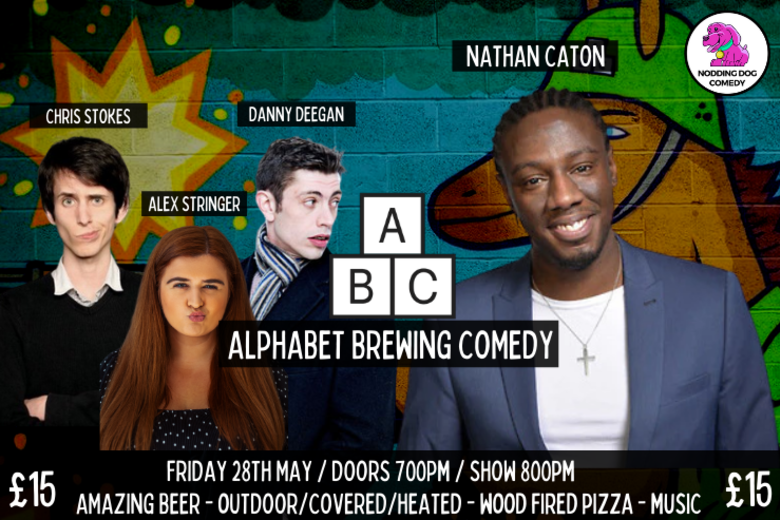 WE ARE BACK IN BUSINESS!

We have a new monthly residency all sorted to bring you big belly laughs, beautiful beers and some blooming brilliant food trucks too!

NATHAN CATON is one of the most exciting young comedians on the scene. Gigging since the tender age of 19, over the last decade he has established himself both as a circuit headliner, and a name on TV and radio.

As seen on Live At The Apollo, Mock The Week, Russell Howards Good News and much, much more!

CHRIS STOKES has been performing stand-up professionally since 2009.

Chris has appeared on Dave’s One Night Stand (Channel Dave), BBC Radio 4, 5Live and Radio X (formerly XFM) and taken 5 solo shows up to the Edinburgh Fringe – the first of which won Best Show at the Dave’s Leicester Comedy Festival Awards in 2012.

DANNY DEEGAN, with the confidence and swagger that you might expect of a North-West comedian, at the very top of his game, is a comedian, writer and actor who has become a regular at most of the major comedy clubs in the UK since he began performing in 2003. “Charming, witty and most importantly funny” – Metro

ALEX STRINGER is on our radar of hot new talents to keep a serious eye on! Storming across the NW comedy circuit, Alex has a unique turn of phrase coupled with the ability to instantly connect with audiences, delivering big laughs wherever she performs!

So, head on down to the brewery for our outdoor, but covered, soon to be legendary stand up comedy club.

Mix into the night the amazing ABC taproom, a food truck and top music and this is one heck of a brew that you don't want to miss!

Line-up subject to change, unfortunately we are unable to provide refunds for reasons other than the gig being pulled.

Display your ticket/s upon arrival, we'll email them to you. Enjoy the show. Doors open early so you can eat order food.

Liam waterhouse was so funny best of the night by far!

Not sure the quality is getting better.

So much fun just what everyone needs right now, it’s part of my Sunday night ritual can’t wait for Heat 4 ⭐️⭐️⭐️⭐️⭐️⭐️⭐️⭐️⭐️

Robert M reviewed HEAT ONE: New Online UK Comedian of the Year 2020 which happened on 8:30pm on Sun 26th Jul 2020.
Comedy
Venue
Price
Atmosphere
Would you recommend to a friend?
Yes