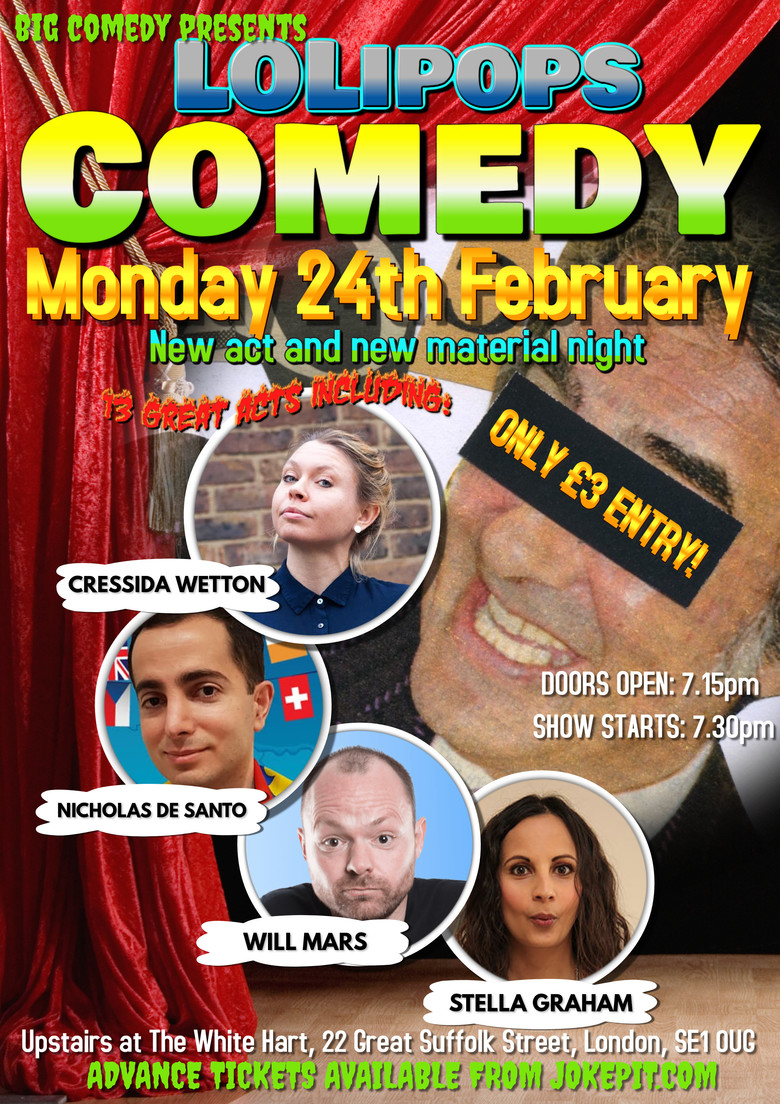 Naturally funny stand-up comedian, writer & actor
STELLA GRAHAM
Shameless, candid, charmingly aggressive and unladylike, she's the funniest half Sri Lankan lass from Coventry.
"Fun and original... everything a good comedian should be: self-assured, likeable and, crucially, funny" - Broadway Baby
“She's also got a terrifically funny way with one liners, as they subverted expectations and delivered punch lines which were squarely at your sides.” - TVNZ
"Laugh-a-minute" - Fringe Benefits, Adelaide Fringe

So You Think You’re Funny semi finalist
CRESSIDA WETTON
is from the West Country, but lives in London and performs over the UK offering a unique slant on small town mentality. Her hilarious observations of family life, and the characters she met in her previous office job, will seduce any audience with intelligence and wit.
Laughing Horse New Act of the Year 2014 – Semi finalist ·
BBC New Comedy Award– Heat runner up 2017 ·
Regional finalist of Funny Women’s new act competition 2018
“Captivating presence” - The Stand

Star of Showtime at the Apollo and Stand up for Comic Relief
WILL MARS
“Damn that dude is funny!” Steve Harvey, Showtime at the Apollo (U.S.).
“punctures an expectation and implies a whole bizarre reality in only 12 words” Brian Logan, Guardian.
“… no topic is taboo… a unique and witty perspective on thoughts that many have but rarely articulate” Adelaide Advertiser (Australia).
“His fast-paced performance is refreshingly brutal” Ed Fringe Review.
“Mars’ pithy observations are sharp and on point” broadwaybaby.co.uk

International right-wing comedian
NICHOLAS DE SANTO
In his stand up show, he uses his knowledge of world flags (every single one of them!), and foreign languages to prove Brexiteers can be fun, knowledgeable and cosmopolitan.
"Inimitable brand of knowing, right-wing humour. Smart material, an innately funny delivery, and a cheeky penchant for teasing the audience." - PhoenixFM
"With collected mastery and wry delivery, presents the case for conservatism in an age of leftist artistic domination. Timely, truthful, and quite funny." - Will Franken
“Hilariously conservative, like Abe Lincoln, and just as mind blowing.” - Scott Capurro
"An unapologetic right-winger" - Evening Standard

As seen in great clubs across the UK . . .
ADAM RILEY
"He always goes down well" - Martin Besserman, Monkey Business.

All hosted by your hilarious MC for the evening . . .
FRANK CASSIDY