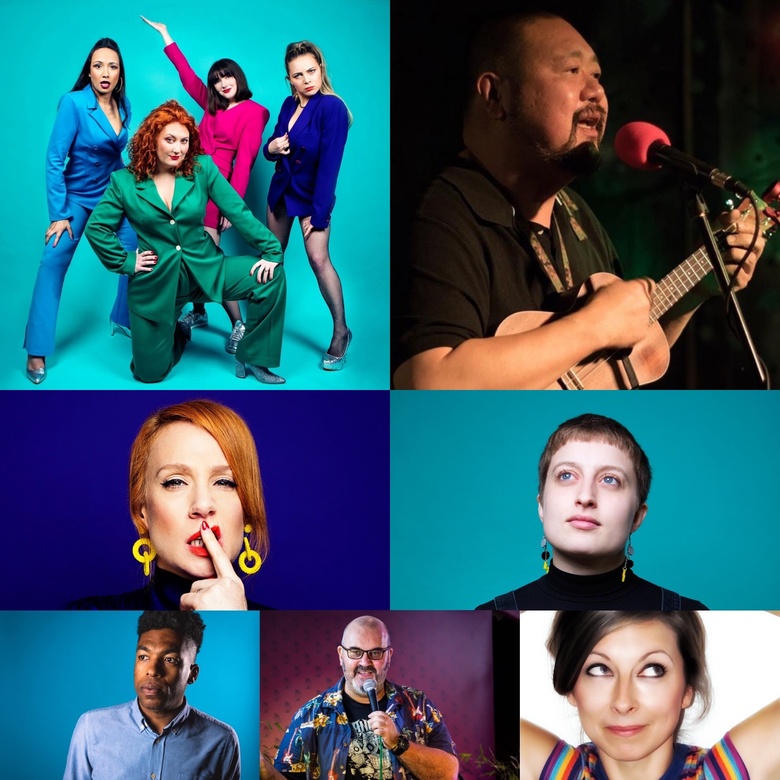 The legendary Happy Mondays Comedy at The Amersham brings you a Bonus Sunday Comedy show for those who struggle to make the weekly Monday Comedy show! End your weekend in style and come hear brand new jokes & fresh ideas from stars of TV, Radio & Stand Up comedy circuit in a friendly atmosphere.

We bring you fantastic line up of comedy talent including brilliant, bawdy & hilarious Flat & The Curves (Musical Comedy Awards 2021 runners-up) , Sara Barron- As seen on BBC's Live At The Apollo , Frankie Boyle's New Word Order, Would I Lie to You? & Comedy Central's Roast Battle , Funny Women Award winner Harriet Braine, Toussaint Douglass (As seen on BBC 1's "Stand Up for Live Comedy") plus Jo Romero "surely be a force to be reckoned with.” Chortle.co.uk providing the lols plus post show live music & singalong from much adored Tony Ukulele all hosted by your cheeky MC Sion James at the ever popular Amersham Arms.

Tickets £8 Advanced £10 Cash on The Door

Flat & The Curves
After their hit Edinburgh Fringe debut, The new Act of the Year 2022 and Musical Comedy Award 2021 finalists bring you their feminist cabaret of unbridled fun. Dressed tit-to-toe in sequins, the award-winning Flat & the Curves deliver original songs about sex, scandal & sisterhood.

You can expect a raucous, risqué evening of empowerment. Think, ‘Fascinating Aida’ meets ‘The Inbetweeners’. There'll be big voices and bold statements in this risqué evening of hilarity and full-frontal vulgarity!

Get ready to laugh, blush, and relate!

Harriet Braine
As heard on BBC2 Jonathan Ross show , Funny Women Award Winner 20216 & Winner Buxton Fringe Comedy Award.
"If you like musical comedy with a twist Harriet will have you howling” (Metro.co.uk)
If you like amusing accents, bizarre characters, a woman making trumpet noises (with her mouth), you'll love this.

Toussaint Douglass
As seen on BBC 1's "Stand Up for Live Comedy" & Dane Baptiste's new 2021 BBC 3 show " Bamous"
"There’s something of a Richard Ayoade vibe.... One of the best and most distinctive acts… " (Chortle)

Jo Romero
Jo is an accomplished, unique, warm and likeable stand-up comedian and actor. Regular host for Amnesty International Women’s Day Comedy shows. “Romero will surely be a force to be reckoned with.” – Chortle

*Tony Ukulele
A legend of the South London live music scene,  post comedy show live music and post show singalong of anthems & requests from much adored and uber talented Tony...*no prizes for his instrument of choice.