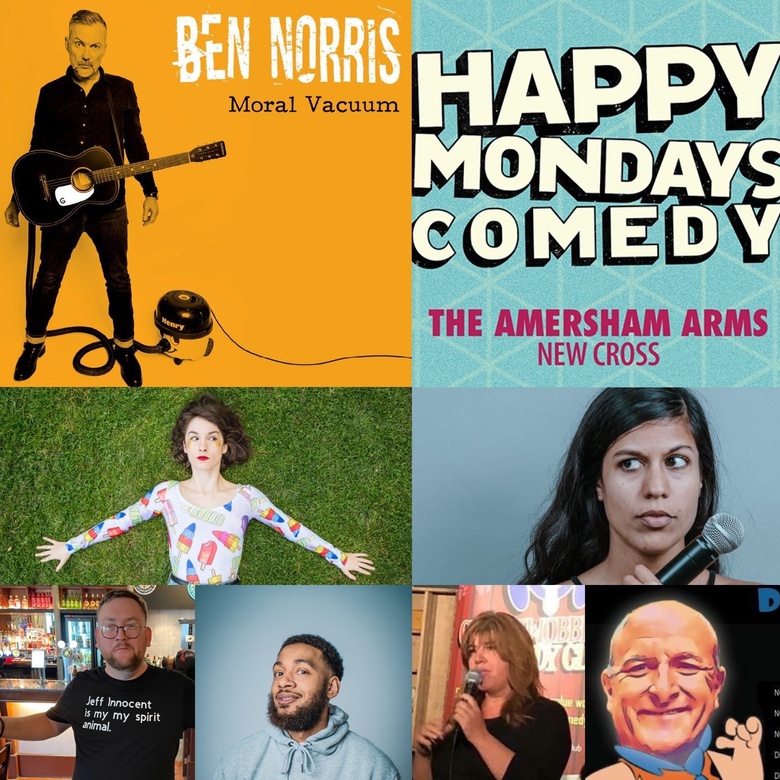 Ben Norris
The term circuit legend is overused, but Norris rarely departs a stage without leaving it torn to shreds in his wake.
A master of the craft, Norris may not be a household name, but then very few really good comedians are these days.
Ben will be rocking out new gags along with a selection of songs from his first comedy music album‘Moral Vacuum'
Ben's TV credits include "Never Mind The Buzzcocks", "They Think It's All Over" and "Mock The Week".
"A cast iron guaranteed headliner" - Londonisfunny.com "A wonderful disgrace of a human being" - Daniel Kitson

Luke Craig
Finalist in the 2019 Leicester Square New Comedian of the Year, Luke draws the audience in with his impeccable wit and stage presence. Topics ranging from his South London upbringing to fatherhood, Craig is surely one to watch out for.
“He is a compelling storyteller, with command of pacing, timing, and the dramatic pause.” – The Evening Standard
“His talk of growing up around the shady characters of Croydon and Lewisham, offer[s] some insight into a world not often credibly portrayed” -Chortle

Sophia Del Pizzo
Sophia Del Pizzo is an actor and comedian who has appeared in It’s Always Sunny in Philadelphia and is currently starring as a series regular on Whitstable Pearl.' After demonstrating her superlative ability in sending important messages in the funniest fashion, Sophia Del Pizzo marks herself as one to watch' - The Upcoming ☆☆☆☆

Charlie George
LGBTQ New Comedian of the Year 2019. So You Think You’re Funny & Funny Women Awards Runner up 2019
Charlie’s a former circus performer and dancer, who came to comedy to find her voice. Turns out her voice is a lot like an 18th century white man’s trapped inside the body of a queer brown lady. Charlie Brooker's BBC 2 Writers Room

Mossy
The Fresh Prince of the OC's , zoom security guard, the lovechild of Russ Abbott and Rodney Trotter

Jo Ostrowska
Streatham's own wonder woman & super mum turns her hand to stand-up comedy.
Steve Holmes
Nearly 40 years after meeting Captain Birdseye at the opening of his local Co-op, Steve decided to get into comedy. With a moral, mental & physical stance influenced by NHS grade painkillers, Steve wants to do good in the world, but is easily distracted in his efforts.