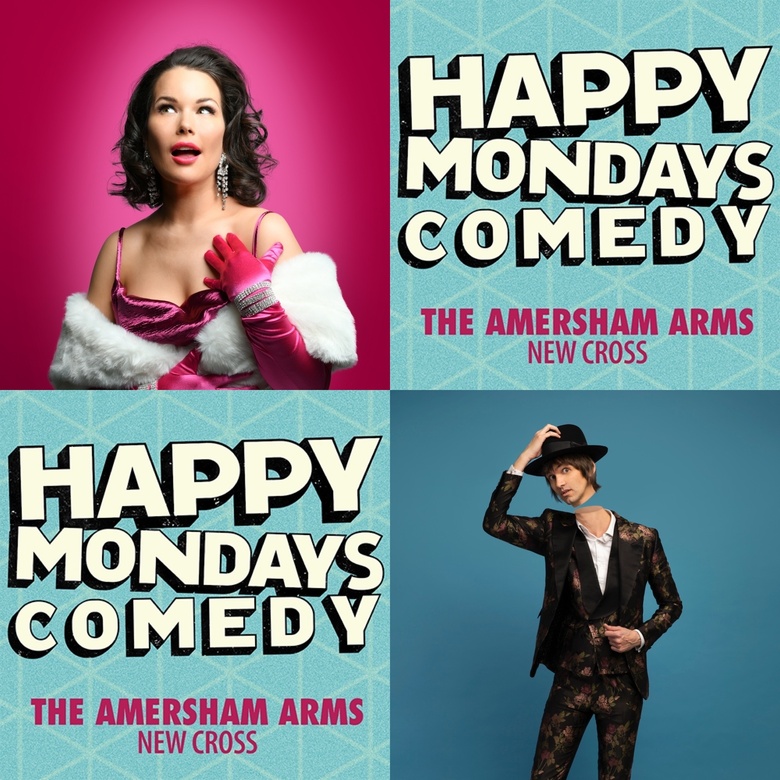 Happy Mondays Comedy at The Amersham Arms New Cross bring you a fantastic double bill of Edinburgh Fringe Festival Previews of two brilliant comedy acts warming up their comedy shows for Edfringe. We have Canadian comedian Michelle Shaughnessy with her show ‘Be Your Own Daddy’ , directed by Adam Hills (The Last Leg & BAFTA Nominee) and of whom Katherine Ryan says "Be one of the first to see Michelle in the UK before she's all over the TV. Hilarious" plus we are very excited to have indie wizard Pete Heat who brings a joyously unhinged hour of stand-up, magic and inspired lunacy, As seen on Sky TV (Secrets Of The Brain), Prime Video (Around the World in 80 Tricks)
BBC1 (Now You See It) & more, Dawn French said of Pete “I have never seen a better magician than this lanky dude” providing the lols all hosted by your cheeky MC Sion James at the ever popular Amersham Arms.

Michelle Shaughnessy : Be Your Own Daddy (Edinburgh Preview)
Introducing Canadian comedian Michelle Shaughnessy who debuts at the Fringe this year. The show, directed by Adam Hills (The Last Leg and Bafta Nominee), ‘Be Your Own Daddy’ is the story of how Michelle spent her whole existence waiting for someone to fix her life. Already established in Canada, she’s had numerous TV appearances and her debut album ‘You Know What You Did’ hit number one on the iTunes comedy charts.
"Be one of the first to see Michelle in the UK before she's all over the TV. Hilarious" Katherine Ryan

Pete Heat : Blimey (Edinburgh Preview)
A joyously unhinged hour of stand-up, magic and inspired lunacy.
“Like Noel Fielding performing sleight of hand, some lanky, cuddly love-child of Demetri Martin and Mitch Hedberg” FEST
But what is magic? How do magicians do it? WHY do they do it? Don’t they know everyone hates them? What’s with the clothes and the little beards? Pete tackles these issues head on, with great jokes, mind-blowing and surreal tricks, and fascinating anecdotal peeks behind the curtain into the world of the professional magician, as we journey down Pete’s sleeve, through various parallel universes and into his sac magique

Pete is one of the world’s top magicians. He taught actual Dumbledore (well, he was hired by Jude Law as a magic coach for Fantastic Beasts), and he regularly rubs shoulders with celebrities all over the globe. He stars in a number of TV series, including Secrets of The Brain and Around The World In 80 Tricks (Prime Video), as well as various critically acclaimed solo shows. He even creates magic for other magicians, working behind the scenes for shows like Tricked and Britain’s Got Talent.

He loves magic, but he’s starting to realise he kind of hates it too. It’s amazing, but it’s embarrassing.
Can Pete fend off existential dread using a pack of cards? Will he make you look at your OWN life choices in a new light, and come away feeling refreshed and fulfilled? Probably not. It’s a funny show though.
“Excellent at what he does, and also very, very funny” FringeGuru * * * * *
Hate magic? You’ll love this show. Love magic? You’ll REALLY love this show.