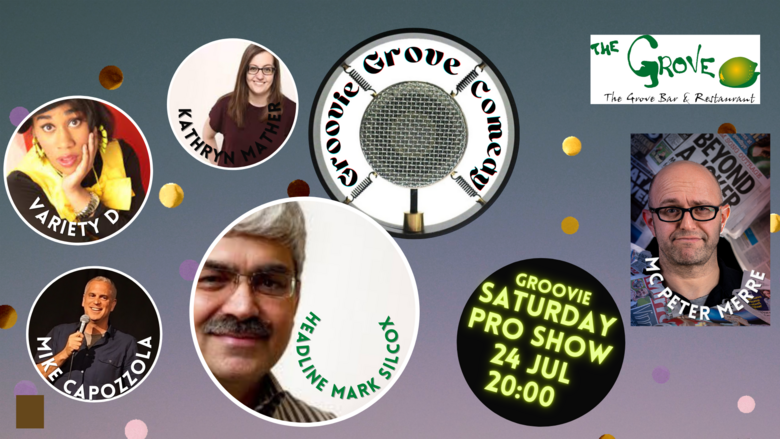 Showcasing some of the top names on the comedy circuit.
Topical comedian and MC Peter Merre (talkSPORT, BBC Radio, SOCCER AM, Topical Comedian at Brighton and Edinburgh Fringe) showcases musical, character and stand up comedy with some of the most hilarious performers around. @topicalcomedian
MC Peter Merre introduces top acts from tv and the circuit.Headliner Mark Silcox plus Kathryn Mather, Variety D, Mike Cappozzola and Dave Lynch.

Mark Silcox started comedy in 2009 on the London open-mic circuit while holding down his day job as a lecturer.
In 2013 he reached the BBC New Act Final and appeared on the One Show along with the other finalists.
Before the pandemic, Mark was a regular at the Edinburgh Fringe with his quriky science based shows, and has been seen on countless television shows such as Joe Lycett's Got Your Back (Channel 4), An Immigrants Guide To Britain (C4), Mandy (BBC2), The Luke McQueen Pilots(BBC1)  Rovers (Sky) Big Asian Stand Up (BBC2) Romesh Presents (BBC3) and Man Like Mobeen (BBC3)

Dominique aka Variety D began stand up comedy when she was 16 years old and has progressed more and more as the years went on, experiencing Repertory Theatre and Alternative Comedy (Outside her comfort zone). To broaden her horizons in Show business, she took part in many workshops, in and out of comedy, and performed in plays for Radio 4 and took on presenter roles for you tube channels. Variety is also very active on social media and took part in many zoom comedy gigs during lockdowns.
Variety will be one of the main stage acts in August in a comedy festival to set up by Rudi Lickwood to fill the gap left in the calendar for the absence of the Notting Hill Festival.
Mike Capozzola is a New York raised / London-based stand up comic.Since 1990, he's performed in most of the USA as well as the UK, France, Israel, Bulgaria, Switzerland, Germany, Spain, Denmark, Poland, the Netherlands, Dubai, Luxembourg and Turkey.

Dave Lynch is an Irish comic from Birmingham living in London, he started comedy in 2018 and in 2019 started running the popular Quintessential Comedy in Kentish Town, he also hosts the new act new material sunday nights at Groovie Grove Comedy and tonight is his first saturday show at the relaunched venue after lockdown!

“Very funny with a distinctive comic voice” – Nish Kumar
“Kathryn is one of those new comedians that makes you want to quit she’s so prodigious. She’s a brilliant and unique voice.”– Kiri Pritchard-McLean