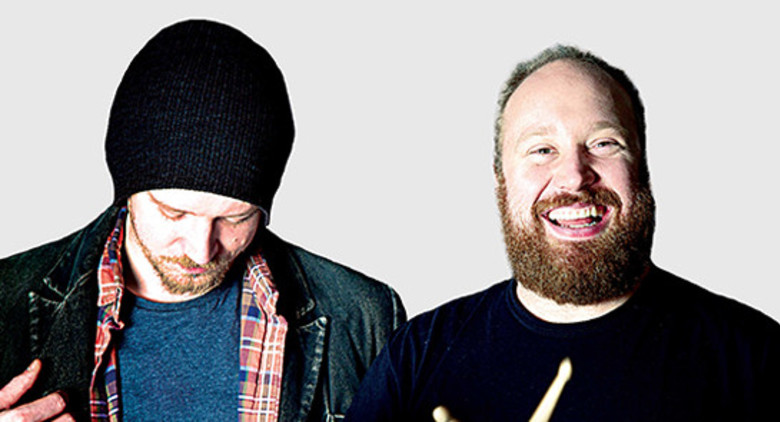 JONNY AND THE BAPTISTSOne of the UK’s hottest live musical comedy acts with ever-increasing live audiences from several hit tours and festivals, Jonny & the Baptists have been regulars on BBC Radio 4’s The Now Show and once topped the iTunes Comedy Chart with single ‘Farage’. They have also supported Mark Thomas on tour, appeared on the BBC’s Live at Television Centre and received death threats from unsurprisingly humourless UKIP supporters.  They write gloriously heartfelt, furiously angry songs about politics, love, creepy children's authors and how to make the world a better place.Lead singer, Jonny Donahoe has the voice of a lovelorn old bluesman and makes audiences fall immediately in love with him.  As well as been a tremendous front man, he has been nominated for a New York Drama Desk Award for his hit one-man show Every Brilliant Thing on international tour, while Paddy Gervers has a cult following for acclaimed podcast ‘Podshambles’.

“Fieriness and heart… The enthusiasm, avidity and passion of the band radiate well after the gig has finished.” The List

Sweet as chocolate and twice as dark, Rachel’s comedy treads the line between kitchen sink confessional and a bleakness unmatched by her peers. A finalist of several prestigious competitions including Funny Women, City Life Comedian of the Year, NATY’S, English Comedian of the Year and the Welsh Unsigned Stand Up Award she can move from amiable and engaging comedy to serial killers in the same sentence.

Aside from gigging up and down the country, Rachel co-hosts and co-writes the popular serial killer themed podcast All Killa No Filla. It has acquired tens of thousands of listeners around the world and live shows have been in high demand.

ELLIOT STEELFollowing impressive performances and wowing audiences at the Latitude, V and Reading festivals and being nominated for Best Debut at the Dave’s Leicester Comedy Festival 2015, Elliot Steel is a must-see comic name to watch out for.Elliot’s hilarious and honest routines are gritty real-life tales of growing up on a South London council estate – all delivered in his refreshingly individual style with a confidence and stage presence beyond his years.Following his successful Edinburgh shows in 2016 and 2017 Elliot appeared on Comedy Central’s Live from the Comedy Store as well as Roast Battle which saw Elliot and his dad Mark Steel go head-to-head to roast each other with the most brutal jokes imaginable.Elliot has also been heard on BBC Radio 1’s Comedy Lounge and BBC Radio 4.

“One to watch.” The Independent


BEN VAN DER VELDEOne of the quickest wits around and a much-loved compere, he always brings a jam-packed back of nonsense, silliness and wisecracks to every gig he hosts.