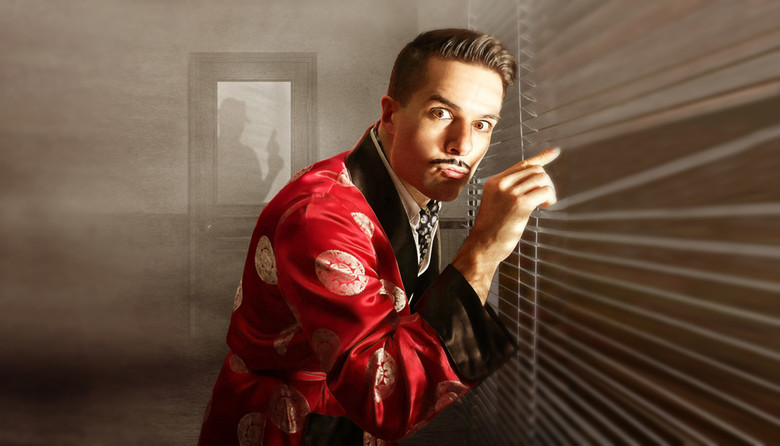 Troy Hawke is an erudite homeschooled 1930's throwback, the Errol Flynn of the high street. Educated, sophisticated, but utterly clueless. He tackles modern issues head on in his uniquely untimely manner.

Troy is the dapper alter-ego of acclaimed character comic Milo McCabe.  A hive of mad invention, Milo has been delighting audiences with his disarming and brilliant creations for years.  Troy is without doubt his finest yet: channelling the finest elements of the timeless, clueless English chap and popping him into the chaos of the modern world, Milo has created a winning formula that sees his take the roof off clubs and festival rooms up and down the country.

"Spectacular character...brilliantly sharp, lacing his wit with a touch of the surreal." Fest

Kelly Convey is a comedian who is not one to mince her words when giving audiences an insight into what modern women really think. While her outspoken and forward-thinking musings may go against the grain, she has a refreshing and relatable authenticity that regularly wins audiences over.  Voted by The Metro as “1 of 9 Hilarious Women to Look Out for in 2017”, Kelly Convey is, no doubt, one to watch.

Widely considered to be one of the rising stars in Australian comedy, Ray has performed two solo shows, Raised and Confused (2015) and Junior (2016) at Melbourne International Comedy Festival. He has also performed shows as part of the Sydney, Perth, Brisbane, and New Zealand comedy festivals. He has appeared on the Sydney Comedy Festival Gala twice, in 2014 and 2017.

An exciting name in the world of stand-up comedy, Irish comic Marise Gaughan is making waves with her dark and honest comedy style. Marise started her comedy career in Los Angeles, where she featured on some of the main comedy clubs such as The Comedy Store and The Hollywood Improv. Since returning to the UK, the Dublin-based comic has become a favourite in all the major comedy clubs and has supported Rob Delaney, Ari Shaffir and Jim Norton on tour.

Her debut show Drowning discusses her father’s (successful) suicide attempt and her own (unsuccessful one). It premiered at the Dublin Fringe Festival last September where it was nominated for the Fringe’s Spirit of Wit Moira Brady Averill Award for artists willing to take risks and whose work defies categorisation with bold and unconventional material and for the First Fortnight Award for shows that challenge stigma and prejudice about mental health.

“Scalpel sharp, dark comedy at its most brilliant best, disturbing you right out of your comfort zone.” Arts Review

AND YOUR RESIDENT HOST: