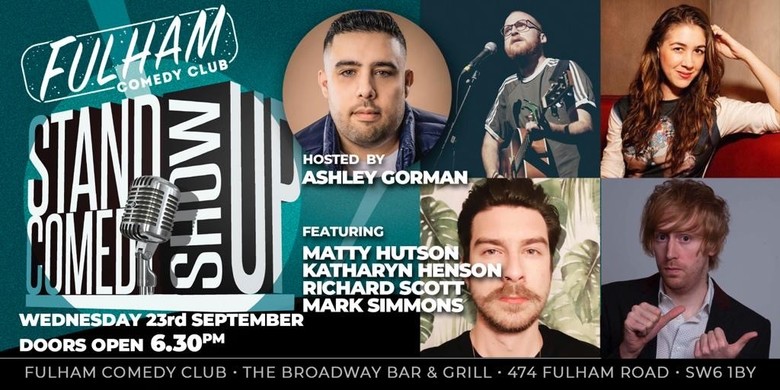 This Wednesday night is hosted by the fabulous Ashley Gorman (Winner of The Comedy Stores King Gong competition) with a fantastic line up including.....

Matty is a musical comedian that was a Musical Comedy Awards finalist in 2017.

Katharyn makes all of New York City laugh on a nightly basis both hosting and performing. She works clubs including but not limited to New York Comedy Club, Gotham Comedy Club, Broadway Comedy Club, Greenwich Village Comedy Club, The Grisly Pear Comedy Club and The Comic Strip. She has hosted shows in the New York Comedy Festival for three years running. Katharyn is also happy to perform comedy for two people in a McDonald’s at midnight if they will have her.

Katharyn made her Edinburgh Fringe Festival debut of her hour of stand up comedy, “Ew Girl, You Nasty” to rave reviews from Kate Copstick from The Scotsman & The Skinny.

So is Richard Stott

Originating from Hull, Richard is an actor, comedian, voiceover artist and writer who trained at the Drama Studio London. He also completed a degree in Theatre Studies & English at the University of Manchester. Richard has been interviewed on The Nihal Arthanayake Show on BBC Radio 5 Live as well as for the Minds Over Matter podcast, BBC No Filter and London Live. He has also appeared in a BBC Quickies sketch for BBC Three.Richard performed his first show Wretched at the Edinburgh Fringe in 2017 as well as at Hull Truck Theatre and the Camden Fringe. Richard’s debuted his solo comedy show, Right Hand Man, at the Edinburgh Fringe in 2019 during which he was listed in Dave’s Top 10 Funniest Jokes. Richard has performed at the likes of the Great Yorkshire Fringe, Roar Festival, Bedfringe, Guildford Fringe, Shaftesbury Fringe, Battersea Arts Centre and Hope Mill Theatre.

Mark is an exceptional one-liner comedian. It won him a place in Dave’s prestigious Best Joke of The Fringe in Edinburgh 2017. His solo show at the festival, One-Linerer was also a huge hit, with sell out shows every day and was nominated Best Show by the Amused Moose Comedy Award Fringe Show 2017. He then continued this success with his follow-up show, One-Linererer, which was also a sell out! Mark has also been featured on Mock the Week.

All of our events are safe and socially distanced.