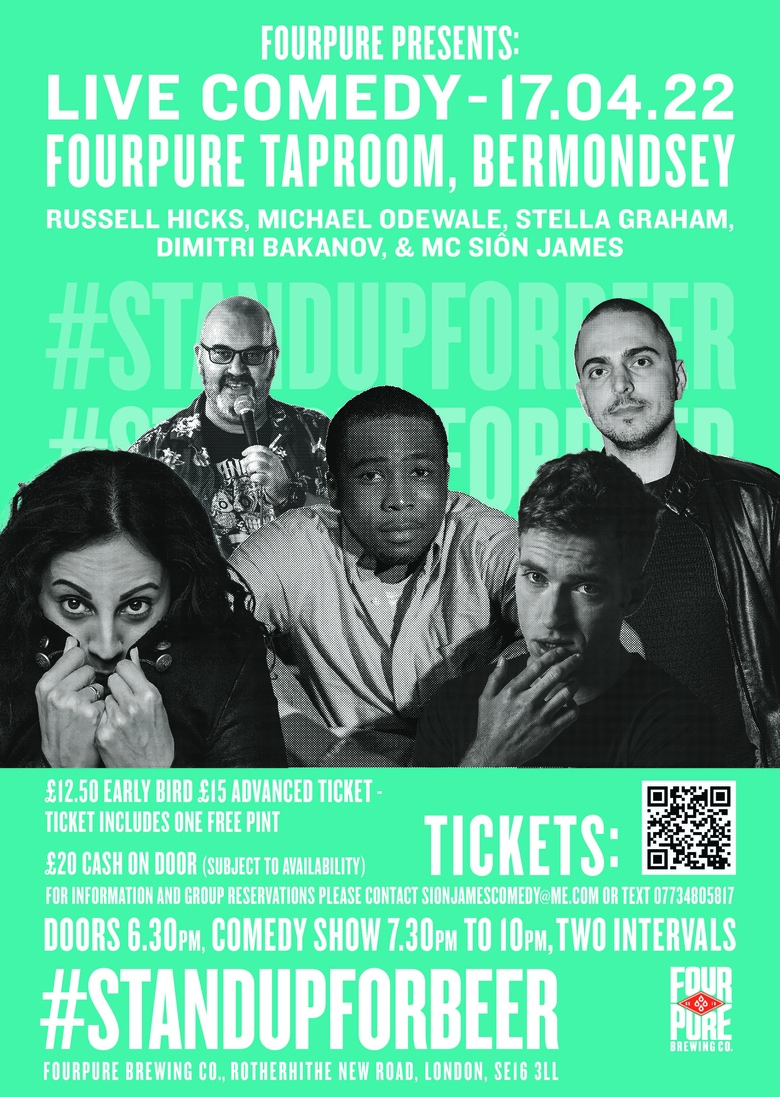 Come enjoy some fantastic comedy and beer at Fourpure's Brewery & Taproom ! A chance to sample some tasty beverages in a real live working brewery along with some great live comedy! Gather your pals together and let's organise a Laugh Up in a Brewery!
Like Live Comedy ? Like Craft Beer? Then you will LOVE This!!! - Ticket Includes a Complimentary Fourpure Craft Beer.

Fourpure are very excited to bring a new comedy club at their Bermondsey Taproom ! We have a fantastic line up of comedy talent for you including the awesome & unique brand of improvised stand up comedy Californian style from legendary Russell Hicks, Michael Odewale ( BBC Presents: Stand Up For Live Comedy , Mock The Week ,The Mash Report & more ) , half-Russian, half-Ukranian comedian Dimitri Bakanov, the naturally funny talents of Stella Graham providing the lols , all hosted by your cheeky charming MC Sion James. Ticket Includes a Complimentary refreshing Fourpure Craft Beer.

Fourpure Brewery & Tap Room is located in Bermondsey Trading Estate - from the entrance gates, follow the estate road past Howdens , past the Sushi hut, underneath the train line and turn right and you will discover Fourpure HQ on the left.

Russell Hicks
One of the most exciting comics to come out of America, Russell Hicks is branded one of the 'Top Six Comics to Watch' by LA's Stand Up Talk Magazine. Russell returns his own unique brand of improvised standup comedy Californian style to Bermondsey.
'Anyone who has seen Russell Hicks knows that it is never the same show twice.
Taking a different approach than most comedians, Russell Hicks weaves improvisation with stream of conscious delivery that has moved many audience members to return for two nights in a row. Nothing in this biography can do his act justice other than to say, you just have to see him live'.

Dimitri Bakanov
Now based in the UK, half-Russian, half-Ukranian comedian Dimitri Bakanov has quickly established himself as one to watch. In his first year as a stand up comedian, he reached the finals of the Leicester Square Theatre New Act competition and the Laughing Horse New Act competition. “Dark, charming and never far from a quality punchline” Piccadilly Comedy Club