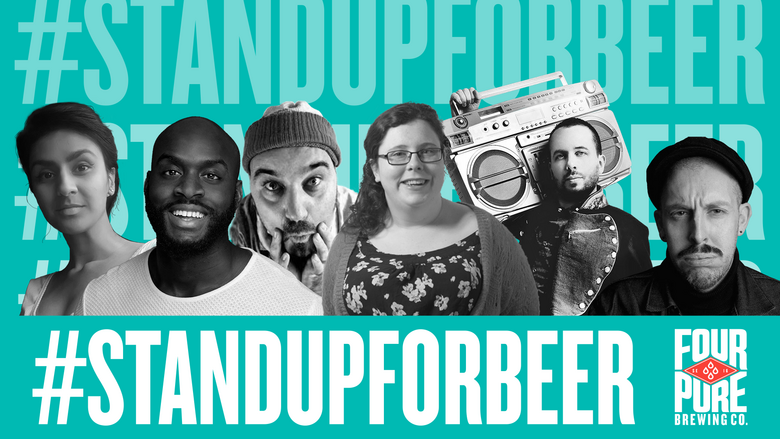 The Grafton pub serves fresh, seasonal dishes alongside pub classics, Winner Best Food Offer at The Publican Awards 2021-yum yum!– if you’d like to book a table to eat before the comedy starts, please email info@thegraftonnw5.co.uk

Abandoman
Ireland’s finest improvised hip hop musical comedian, Rob Broderick, a.k.a. Abandoman.
"Flight of the Conchords meets 8 Mile. Nothing short of genius" Chortle.co.uk
As seen on Channel 4 as house band on Alan Carr's Happy Hour, 8 Out of 10 Cats Does Countdown, as well as supported and toured with pop behemoth Ed Sheeran.
“Broderick has us in the palm of his hand from the minute he starts until the very last mic drop” ★★★★★ Broadway Baby
'A proper party. raucous, expansive and relentlessly hilarious' (The Times).

Alison Spittle
Co-host of Wheel Of Misfortune podcast on BBC Sounds
Alison can be regularly heard on the likes of The Guilty Feminist and BBC Radio 4’s Grownup Land
'Whether character or citizen, Spittle comes across as a kind of genius' ★★★★ (Irish Times).
'A master class in stand up comedy' (Meg.ie). Irish Tatler Comedian of the Year.

Su Kaur
The fine line between class and crass, stuck between culture clash and a lot of trash. Straddling two cultures and being a disappointment in both.

Michael Akadiri
Komedia New Comedian of the Year 2020 As hear on Times Radio, As well as performing comedy, Michael works as a junior doctor in the NHS. "Expect to be laughing regularly at him in the future" Evening Standard:

We want you to be comfortable , relaxed and safe while enjoying some great live comedy! Food is available , Please arrive early for pre comedy dining.
The Grafton pub serves fresh, seasonal dishes alongside pub classics, Winner Best Food Offer at The Publican Awards 2021-yum yum!– if you’d like to book a table to eat before the comedy starts, please email info@thegraftonnw5.co.uk