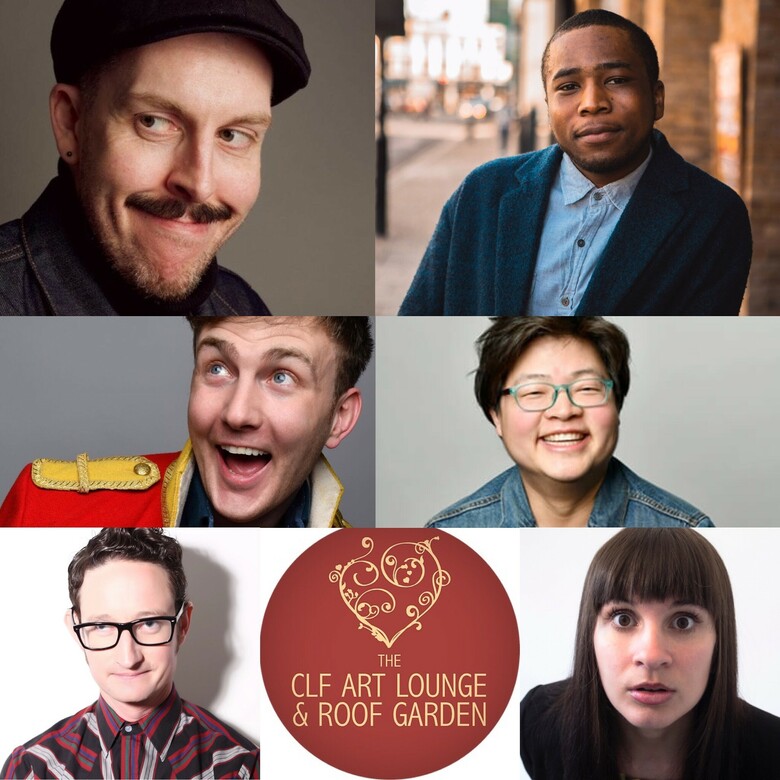 Collywobblers Comedy are very excited to bring a new last Thursday monthly comedy night to Peckham's stunning CLF Art Lounge. We have a fantastic line up of comedy talent for you including the awesome Carl Donnelly - Star of Mock The Week, Dave TV & Two Vegan Idiots Podcast, “Observational genius” - The Guardian, Michael Odewale ( BBC Presents: Stand Up For Live Comedy , Mock The Week ,The Mash Report & more ), Kuan-wen Huang - South London based Taiwanese rising comedy star ,super comedy talents of Zahra Barri , Comedy Central Star & Tower Of London Resident Tom Houghton providing the lols, all hosted by your charming guest MC James Dowdeswell as seen on "Russell Howard’s Good News" (BBC) & Ricky Gervais’ Extras
We are operating the event strictly in accordance with the Government’s guidelines and our experience of hosting a variety of socially distanced events over the last 21 months to help you have a safe and enjoyable visit , reduced capacity , socially distanced , table service and with some of the procedures previously in place to reduce transmission risk.

The entrance is an inconspicuous black door about 10 metres from Peckham Rye Station’s main entrance , next door to the dentist

Kuan-wen Huang
Kuan-wen Huang is an emerging comedian, writer and actor from Taiwan, with major breakthroughs on the UK circuit in the last two years. With a unique voice and his trademark quirky persona, Kuan-wen is an alumni of the Soho Theatre Young Company and recently performed for Comedy Central at the Edinburgh Fringe & as part of AAA Stand-up at Edinburgh Fringe in 2021.

MC James DowdeswellAppeared on "Russell Howard’s Good News" (BBC), "Celebrity Deal Or No Deal with Jimmy Car"  (C4), Ricky Gervais’ Extras,"The World Stands Up" ( Paramount Comedy) James is local Brockley based comedian, author and dogwalker. James recently published a CAMRA recommended book about his love for pubs" The Pub Manifesto: A Comedian stands up for pubs"“James Dowdeswell is a real master of the comedian’s craft.” Chortle.co.uk
Acts shown are correct at time of going to press, in the unlikely event that an artist needs to cancel, we reserve the right to change the line-up without notice.