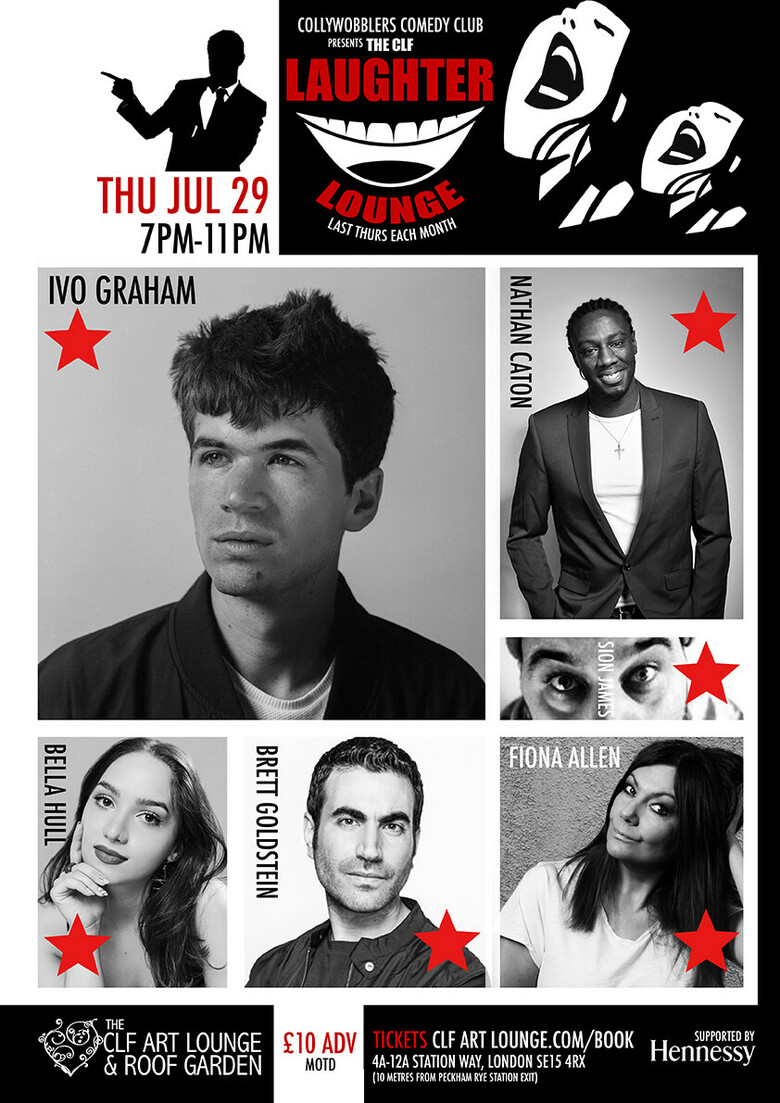 We are operating the event strictly in accordance with the Government’s guidelines and our experience of hosting a variety of socially distanced events over the last 12 months to help you have a safe and enjoyable visit and will be updated accordingly regarding the roadmap update on 19th July We want you to be comfortable , relaxed and safe while enjoying some great live comedy!

The CLF Art Lounge 4a Station Way, Peckham London SE15 4RX
The entrance is an inconspicuous black door about 10 metres from Peckham Rye Station’s main entrance , next door to the dentist

Nearest Transport : Peckham Rye Zone 2 ( 10 seconds walk) or Free parking available nearby at Choumert Grove Car Park
Lineup :
Ivo Graham
As seen on BBC's "Live At The Apollo", "Mock The Week" " Have I Got News for You?", "Richard Osman's House of Games",Channel 4's "8 out of 10 Cats Does Countdown" , Comedy Central's "Roast Battle" , Dave TV's "Hypothetical" & more. "A hugely enjoyable hour of stand-up comedy" - The Times **** "On the brink of comedy's Premier League" - Evening Standard **
Nathan Caton
Nathan's award-winning combination of personal and topical anecdotes has led to appearances on BBC's "Live at the Apollo", "Mock The Week" ,"Russell Howard's Good News" , ITV's "Don't Hate The Playaz", Channel 4's Comedy Gala and his own series, Gran Jury. Nathan is also a well-known voice on BBC Radio 4 with appearances on The Now Show, The News Quiz and his sitcom, Can't Tell Nathan Caton Nothing. A huge football fan, Nathan has also appeared several times on the BBC Premier League Show and released his own podcast, Nathan Caton's Football Forum.
Brett Goldstein
Brett is an acclaimed actor, comedian, writer and host of the hit podcast 'Films To Be Buried With. He wrote and appeared in the Peckham based film SuperBob. He also appeared in Channel 4 comedy-drama Derek as Tom. He wrote The Catherine Tate Live Show with Catherine Tate and has written and performed several stand up shows including numerous appearances at the Edinburgh Fringe Festival.
Bella HullAward-winning stand-up, as seen on the BBC's Stand Up For Live Comedy. She was also Yellow Comedy Young Comedian of the Year 2019, 2Northdown's New Act of the Year finalist 2020, and Funny Women Stage Award finalist 2020. "A disarmingly cheeky style... someone I look forward to seeing more of" The Arts Desk

Fiona Allen
Star of the Emmy award-winning TV Show Smack The Pony.As seen on Mock the Week and 8 Out Of 10 Cats , Coronation Street & Eastenders


MC Sion James"Utterly charming ... Lovable giant' Time Out London
Acts shown are correct at time of going to press, in the unlikely event that an artist needs to cancel, we reserve the right to change the line-up without notice.

Please arrive early for pre comedy dining. https://www.clfartlounge.com/menu-2
The entrance is an inconspicuous black door about 10 metres from Peckham Rye Station’s main entrance , next door to the dentist