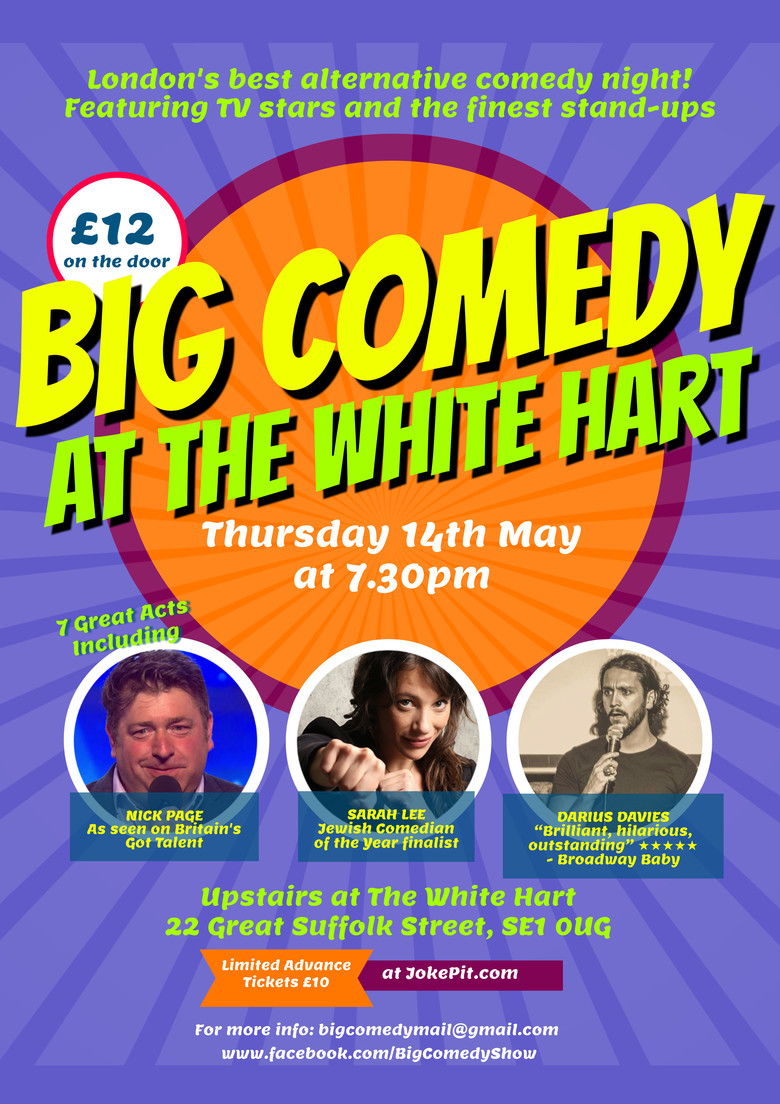 Big Comedy at the White Hart - Thursday 14th May

If you like a laugh and want to see top class comedy then Big Comedy at the White Hart in Southwark is the place for you, an exciting monthly night of stand-up and alternative comedy brought to you by some of the funniest comedians on the circuit.

This month we have another super-awesome lineup with 9 great acts!

English Comedian of the Year 2018 and semi-finalist on Britain's Got Talent
NICK PAGE
With storytelling comics there's a moment where the audience asks themselves 'I wonder if that's true?'. With Nick there is more doubt, because the stories are so outlandish, and yet at the same time there's the sure knowledge that every story is true, and that his is a life lived laughing from disaster to disaster. Drawing on his useless degree (International Politics and Far Eastern History) and inability to do a proper job (he was an estate agent but is mostly cured). He is quite tall, some would say very tall, but that may be hyperbole. His brother holds the record for throwing a Wellington boot (292 feet).

Nick's comedy has taken him all over the world and his debut Edinburgh Festival show had sell-out performances, critical acclaim and a host of 4 star reviews. As well as performing at bases across the UK, Nick has had 7 tours of Afghanistan, with shows at all main bases and many FOBs. Nick was awarded the Operational Service Medal for his comedy work in Afghanistan.

​''A huge dose of likeability with some very clever material'' Bath Chronicle.
''The funniest thing I've seen all year'' Mitch Benn
''Managed to combine a ready wit with his extensive knowledge'' The Stage
''A very fine man'' Jo Whiley, Radio 1

DARIUS DAVIES
The 2017 English Comedian of the Year finalist, Darius is a regular performer at all of the major UK comedy clubs and has also toured internationally. With a particular style akin to a performance poet or faith healer, Darius commands his audience with wonderful charisma – an American style comedian with British soul.
A distinct voice in a sea of ubiquity – Darius is fearless in his belief in what is funny and forging his own path. This is high energy, captivating stand up comedy fuelled with passion, soul and wit.
Darius is also the host and co-creator of the hit sell-out Edinburgh show, Hate 'n' Live along with fellow comedians Justin Panks and Leo Kearse.
“This guy is amazing” - Scott Mills, BBC Radio 1
“Nailing the physical comedy…. great to watch …. you wouldn’t bet against Darius for anything”– The Stage
“Polished” - London Evening Standard
“A bravura performance” – Steve Bennett, Chortle
★★★★★ “Brilliant, hilarious, outstanding” - Broadway Baby
★★★★★ “Davies manages to wring all the emotions you want from a great show” - The Inno View
★★★★ “A knockout sensation!” - Broadway World
★★★★ “Bewitches the audience”- The Wee Review
★★★★ “A near faultless and original set” - ScotsGay
“Full of verve, slightly channelling Russell Brand in his mischief, style and energy” - Chortle
“Very likeable…polished…gets stronger all the time” – Julia Chamberlain, Chortle
“Entertained the crowd with his own unique take and suitable aplomb” - Newbury Today

Jewish Comedian of the Year finalist
SARAH LEE
Sarah's comedy is a bundle of fun laced with a dark, acerbic wit.

As heard on the ECBT2000AD podcast
JULIUS HOWE
"A true hit. I loved his comedy style and his musings on life. Mixed in with the fun and laughter was some good, deep observations on life. Julius embodies the generational voice of so many" - North West End Rating: ****
"Julius has some of the best jokes I have ever heard" - Vince Maple, Leader of Medway Labour Group

Winner of Britain’s top rated MC 1987 & 1989
CLIVE STOKES
“He has a great way with people" – Karl Obermann, Naval Officer
“loved jokes about cats as I have a cat” – Mabel Malone, Comedy to help the elderly
“He’s a funny bastard, but not as funny as me” – Geoff Blenkinsop, Comedian

And rounding things off your classy MC for the evening . . .
TYRONE ATKINS
“Comedy Gold” - Time Out NY

Entry is £12 on the door with discounted £10 advance earlybird tickets available online!