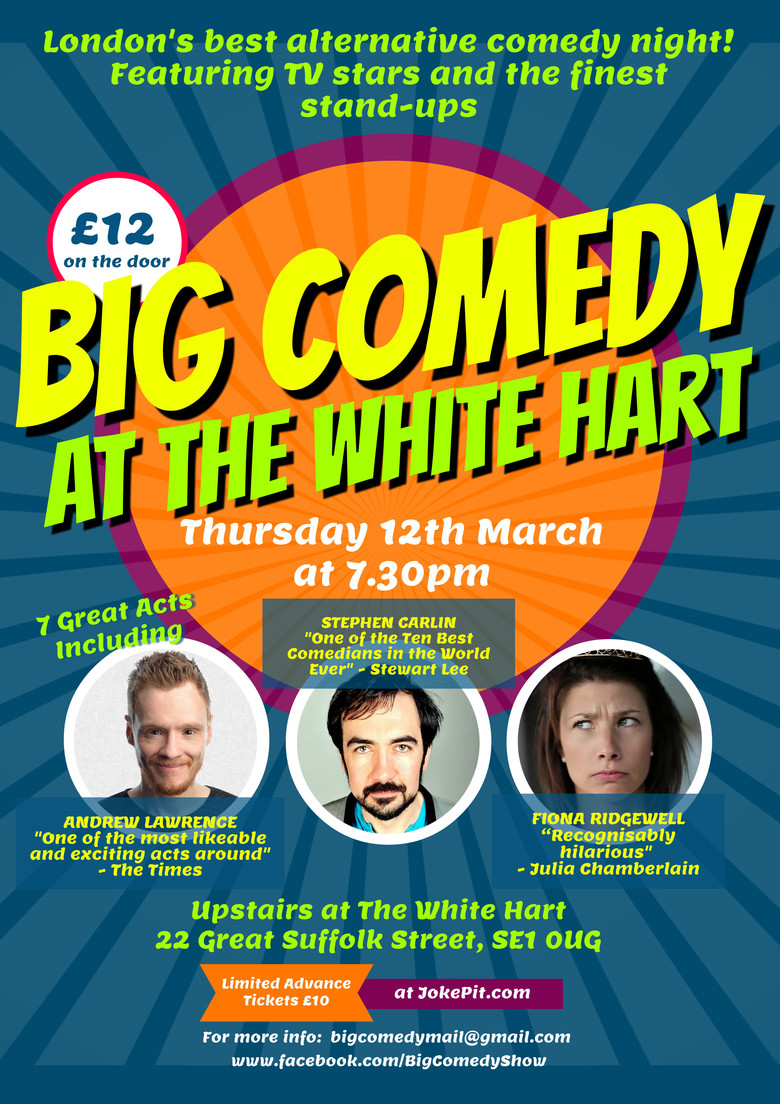 If you like a laugh and want to see top class comedy then Big Comedy at the White Hart in Southwark is the place for you, an exciting monthly night of stand-up and alternative comedy brought to you by some of the funniest comedians on the circuit.

This month we have another super-awesome lineup with 7 great acts!

One of the most highly regarded and most in demand stand-ups in the UK
ANDREW LAWRENCE
Award winning master of dark humour and a provocateur Andrew is despicably white, horrendously middle-aged and most appalling of all - a man! Live at the Apollo comedian Andrew Lawrence presents an antidote to the comedy world's smug, faux-Liberal orthodoxy!
‘Andrew Lawrence is superbly intelligent, highly articulate and deeply sour’ The Spectator

Co-creator of the BBC Radio 4 show 'The Headset Set'
STEPHEN CARLIN
One of Scotland's most brilliant comedians. Stephen Carlin has earned critical acclaim, accolades and a growing fanbase with his original and insightful writing style and accomplished delivery.
“One of the Ten Best Comedians in the World Ever” - Stewart Lee

Watching one too many Disney films has certainly affected her grip on reality, it’s
FIONA RIDGEWELL
"Fiona has funny bones and an easy warmth on stage. She has actual gags, an increasingly rare commodity in today's wispy, live blogging forum of comedy. She knows about delivering the funny stuff . . . recognisably hilarious." - Julia Chamberlain

As heard on the ECBT2000AD podcast
JULIUS HOWE
"A true hit. I loved his comedy style and his musings on life. Mixed in with the fun and laughter was some good, deep observations on life. Julius embodies the generational voice of so many" - North West End Rating: ****
"Julius has some of the best jokes I have ever heard" - Vince Maple, Leader of Medway Labour Group

Winner of Britain’s top rated MC 1987 & 1989
CLIVE STOKES
“He has a great way with people" – Karl Obermann, Naval Officer
“loved jokes about cats as I have a cat” – Mabel Malone, Comedy to help the elderly
“He’s a funny bastard, but not as funny as me” – Geoff Blenkinsop, Comedian

Hosted by the amazing
DAVE WARD
As seen on BBC Three’s We Are Klang, David Ward is one of comedy’s most sought after presenters, writers and comedians. Fluid, quick thinking and lively, David’s warmth and spontaneity have made him the choice host for the BBC’s New Comedy Awards heats, as well as the rounds for C5’s So You Think You’re Funny? His ability to engage with his audience and think on his feet makes him an ideal TV presenter and interviewer.
"Enjoyable and entertaining" Time Out
"A really funny set" Paul McKenna
"guaranteed to be well-received” – Chortle

Entry is only £12 on the door with discounted £10 advance earlybird tickets available online!