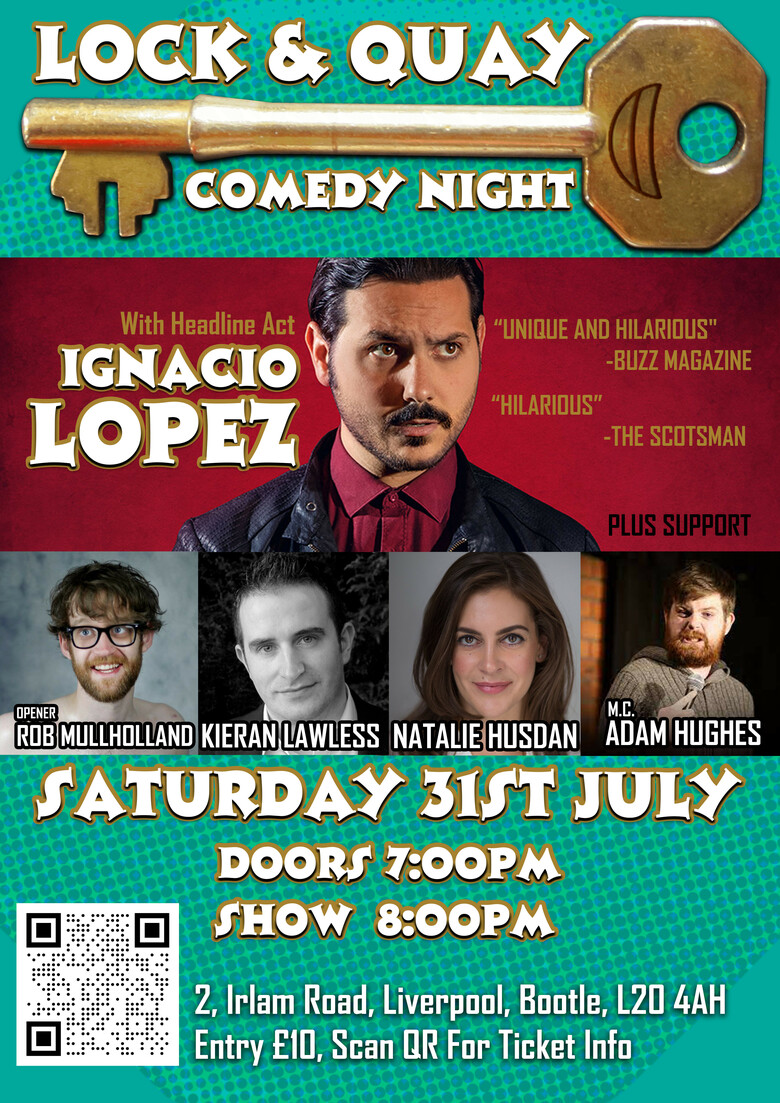 The best comedy night within 100 yards of Bootle tip is back and again features some of the best comedians on the UK Comedy Circuit!

Weaving tales from the gutter and combining them with improvised humour Hughes was a finalist in the Southport Comedian of the Year 2016, Runner up at Beat the Frog World Series 2017 and nominee for Best New Act at the North West Comedy Awards.

“Unstoppable” - Steve Bennett, Chortle
“A breath of fresh air” - A Rush of Laughter
“Fantastic at being funny.” - Tony Law

Six foot seven of pure funny, Rob Mulholland is a bombastic, mischievous gag-slinging rascal with a heart full of humour and gob full of shite. An established, bullet-proof comedy Pro forged in the fires of the northern comedy circuit who now travels the world packing big belly laughs. A regular at all the biggest comedy clubs in the UK; whether going for the kill with his playful filth-mongering and hilarious, furious tirades against minor annoyances or holding a night together with his genial but sharp hosting skills, he can adapt to any kind of crowd and event.

Rob is the host of hit podcasts, "Rob Mullholland Has An Opinion and "The Bielsa Bible" and is a writer for popular BBC Panel Show, 'Mock the Week.' He has been featured on BBC's 'Comedian Rap Battles' and his full stand-up special "Too Big To Fail" is available for free on Youtube.

He has done really well in comedy competitions, as you can see by his competition credits:

Kieran Lawless is an award-winning Irish Comedian based out of Manchester, winning the ComeBulmer's Comedy Competition Winner 2007 and Angelic Banana Comedy Smackdown in 2008.

As heard on BBC Radio 4 and BBC Radio Manchester, Amy is a versatile musical comedian stitching together irony, sarcasm and songwriting with her "phenomenal" voice.

Her songs are accompanied by a live piano as well as live triggers and backing tracks she’s composed using the music software, Ableton.

After winning her first 'Beat The Frog' in May 2019 at Manchester's Frog and Bucket Comedy Club, Amy qualified for the World Series finals in October 2019. She also went on a 10-date summer tour of open spots stopping at Edinburgh Fringe, London and Manchester. Since then, Amy has performed live on air on BBC Radio 4, BBC Radio Manchester and is a finalist in the 2021 Musical Comedy Awards in London.

Ignacio Lopez is a Spanish & Welsh comedian based in Cardiff. His parents are Welsh/Irish & Moroccan/Spanish, and he has a German sister; family get-togethers are like a meeting of the U.N.

As well as hosting TV shows, headlining top comedy clubs all over the U.K and Europe, and taking the piss out of British people directly to their faces,  Ignacio writes sketches, sitcoms, and tweets. Every few months something he tweets will go viral and he'll gain a few thousand followers before they realise he doesn't just tweet witty observations about public transport and songs about hating the UK. - then they unfollow until the next tweet goes viral. The fickle bastards.

Ignacio has performed for the Wales Football Squad, opened for James Dean Bradfield of the Manic Street Preachers and hosts comedy and corporate events around the World.

“CHARISMATIC WITH A WASPISH CHARM” - Chortle

“FILLED THE ROOM WITH LAUGHTER. RELEVANT & PERCEPTIVE. AN ACT NOT TO BE MISSED” - Broadway Baby


Age Restrictions:
Over 18's only