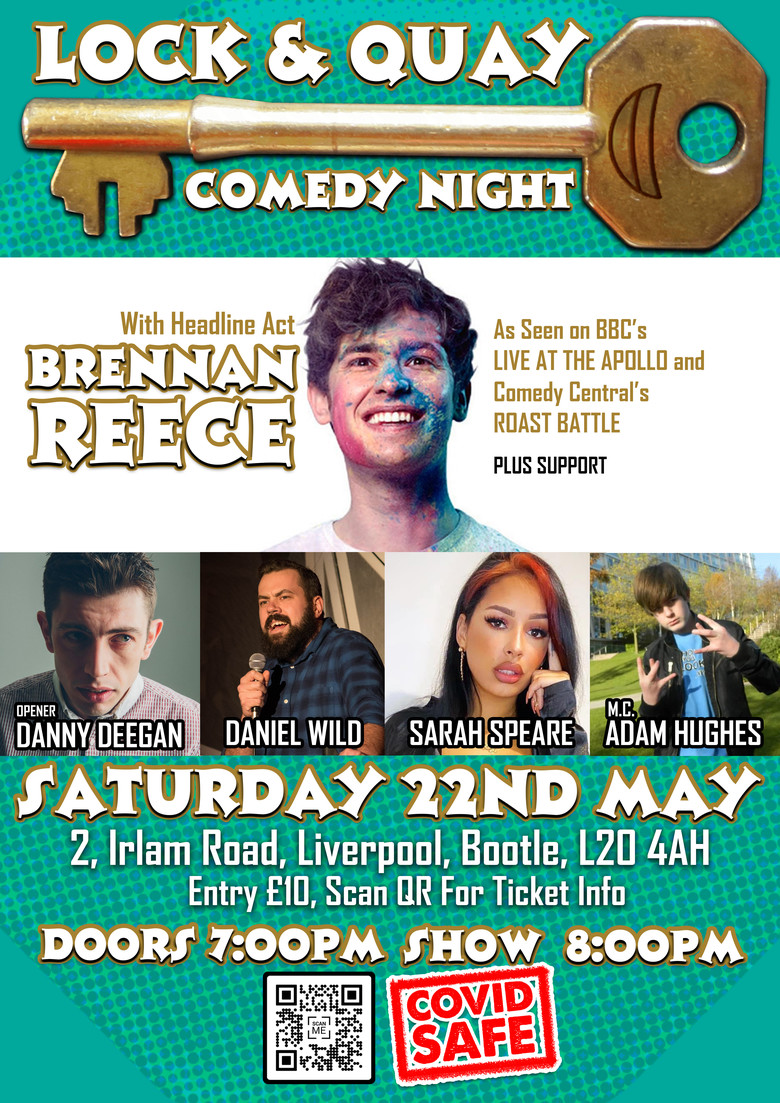 Lock and Quay Comedy Night is back and this time features some of the best comedians in the country.

Weaving tales from the gutter and combining them with improvised humour Hughes was a finalist in the Southport Comedian of the Year 2016, Runner up at Beat the Frog World Series 2017 and nominee for Best New Act at the North West Comedy Awards.

“Unstoppable” - Steve Bennett, Chortle
“A breath of fresh air” - A Rush of Laughter
“Fantastic at being funny.” - Tony Law

With the confidence and swagger that you might expect of a North-West comedian at the very top of his game, Danny Deegan is a comedian, writer and actor who has become a regular at most of the major comedy clubs in the UK since he began performing in 2003.

Danny’s tales of mischief and the characters he creates have kept audiences all over the country enthralled as he weaves in and out of the people he has met travelling. His talent and likability coupled with his confidence make him one of the most popular acts in the North, a master at dealing with a tough crowd, and an act that promoters always turn to when booking gigs.

“Deegan has a mature confidence in his abilities” - Chortle

Sarah Speare is one of those rare talents you find that just has it all. In just over a year on the comedy circuit, Sarah has become a social media phenomenon. Her content has amassed over 6 million views on Facebook & Instagram with her pages boasting an incredible fanbase of 50k and 17k respectively.

Aussie comedian, Daniel Wild, is one of the best new acts in the North West. He has a really affable style that leaves audiences rolling in the aisles.

Self-professed working-class, Lancashire-born Millenial,  Brennan Reece found his passion for performing as a child actor from the age of 4. Having no idea that comedy was a thing people employed you to do, his varied talents saw him make the inevitable transition from an early career in theatre, film to stand up.

In 2016 Brennan’s perfectly pitched debut show EVERGLOW was recognised for its heart-rending honesty and cheerful warmth and saw him deservedly nominated for BEST NEWCOMER at the 2016 Edinburgh Comedy Awards. The success of Everglow has seen him gigging (and giggling) all over the world, including Australia, – where he went on to be nominated for BEST SHOW the Australian Fringe World 2016, as well as tours in New Zealand, Holland and France.

A classic ‘triple threat’ entertainer, the 30-year-old English Comedian of the Year winner has featured in everything from popular TV shows like Live at the Apollo (BBC), Comedy Central at the Comedy Store (Comedy Central), Roast Battles (Comedy Central), Stand-Up Sketch Show (ITV 2), The Comedy Allstars (ABC), Skins (Channel 4) and The Johnny & Inel Show (CBBC), feature films such as Soulboy and Marvelous (BBC Films), as well as a handful of serious plays and all singing and dancing musicals. He has supported the likes of Rob Brydon and Nick Offerman on tour and his 2017 solo tour EVERLONG has just been extended into 2018 due to a hugely popular sell-out run. This comic’s knack for spinning a hilarious and ultimately uplifting yarn is proving to be the perfect antidote for those millennial woes…

COVID Dependent, if the show can't run due to Boris being a blurt, the tickets will be moved forward to a future show, or a full refund will be provided.