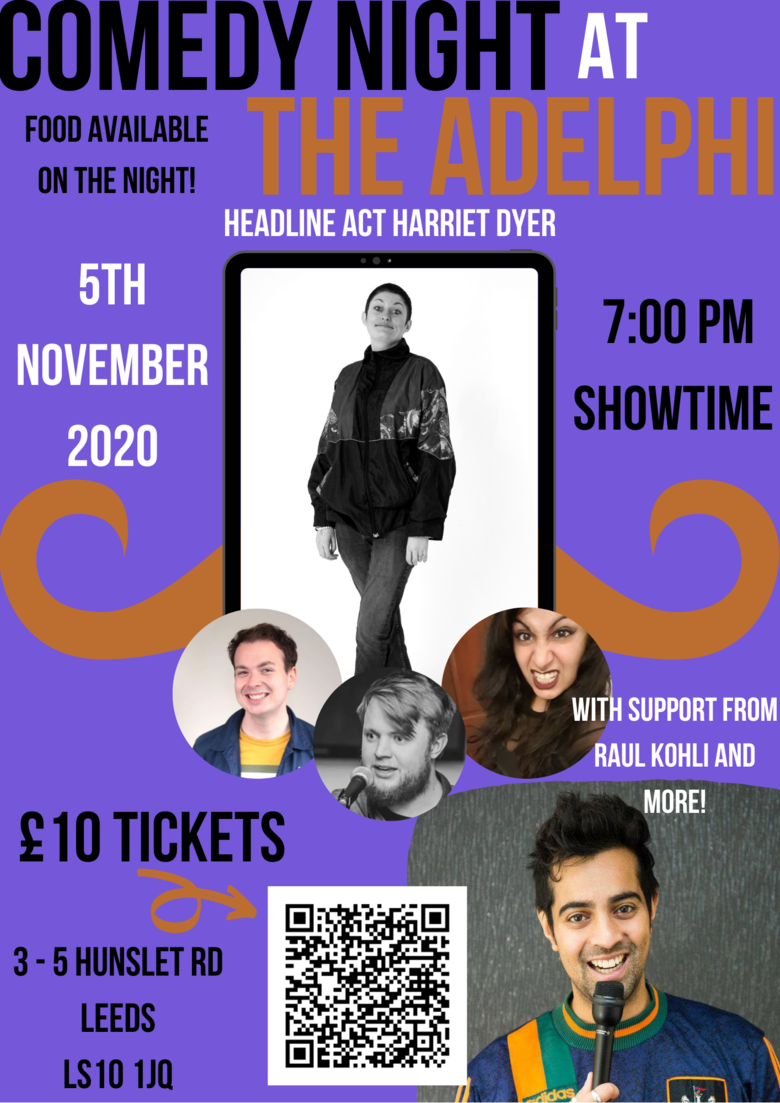 This event is cancelled

Jack O'Clubs Comedy Night at The Adelphi with Harriet Dyer

Jack O'Clubs Comedy Night is coming back to The Adelphi

After surviving lockdown and quarantine we have been working hard to bring you a smashing performance and we have just done that!

We are back in The Adelphi in Leeds with some show stopping performances.

Opening the night is the one, the only, the amazing Raul Kohli!

Raul Kohli has fast become one of the most captivating acts on the circuit. As one of the few Asians to have grown up in the far north of England (Newcastle Upon Tyne), he’s been blessed with a Worldview that upends ethnicity, culture and class. Combining ‘Superb political comedy’ (The Scotsman) with surreal storytelling, Raul Kohli has is a name in Comedy. His Edinburgh Fringe debut show Newcastle Brown Male was one of BBC Radio 4, The Huffington Post & the Skinny’s top picks of the Fringe 2016, while his most recent: All My Heroes Are Dead, in Jail or Touched Up Your Nan was nominated for Best Show at the Leicester Comedy Festivali 2019. As well as several radio & TV appearances (Incl: BBC Radio 4, BBC Comedy Underground, RTV Netherlands & more), Raul is about to release his own 6-part comedy podcast about Hinduism on BBC Sounds’ (Comic Sanskrit 2019) and is a co-host on TalkRADIO’s Penny Smith’s Weekend Breakfast show. Raul is an award-winning comedian (NATYS 2017) and appears regularly at some of the biggest comedy clubs around the World (The Stand Edinburgh, Laugh Canvas India, Comedyhuis Netherlands).

And headlinging the night is the fantastic, the wonderful, the hysterical Harriet Dyer. Harriet(BBC3, BBC Live at The Fringe, BBC Radio 4, BBC Knock Knock, BBC Ouch, Absolute Radio) is an award winning comedian, writer and mental health advocate. Harriet’s got bipolar and does a lot of work through comedy to do with mental health. Her debut solo hour show at the Edinburgh Fringe Festival was about her struggles within mental health. It was critically acclaimed and she toured it as a result. She was so touched by the reaction it got, how many people said how much of an important show it was and how refreshing it was to hear someone talk so openly about mental health. She then started to run / host a safe space comedy / storytelling night called, "Barking Tales.“ At Barking Tales the acts do material about mental health and the people that come tend to have mental health issues themselves. It’s a safe-space and for a lot of regulars it's the only social event they feel comfortable enough to go to. Barking Tales won the City Life Best Comedy Club in Manchester award 2019.

And we have support from Jack Kelly, Seeta Wrightson and Ryan Kenny.

The night is safe and socially distanced so make sure you get your ticket fast before they go!

Earlier start time of 19:00 and table service throughout.

Grab your tea whilst you're at it: