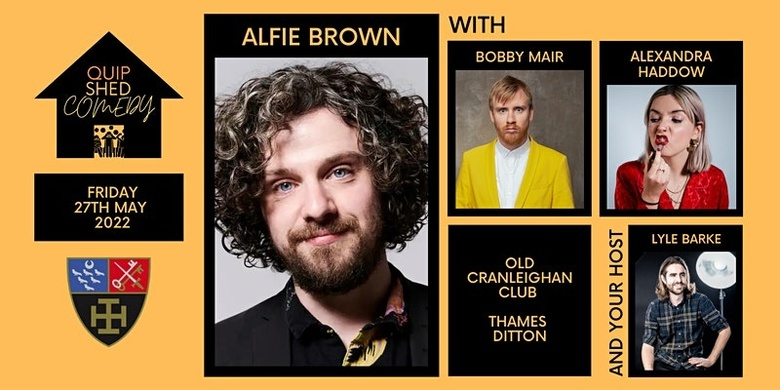 Quip Shed Comedy is excited to continue to host its monthly comedy gig at The Old Cranleighan Club in Thames Ditton on the last Friday of every month.For May, we have an incredible line-up, featuring Alexandra Haddow, Bobby Mair, host Lyle Barke, and our amazing headliner Alfie Brown!

Our opener, Alexandra Haddow, is a freelance journalist, comedian, and one third of the School for Dumb Women, a weekly podcast that explains things you’re too proud to admit you know nothing about. Alexandra has supported Jack Whitehall and Frankie Boyle as well as hosting a number of pro monthly nights across London. She is one third of What’s The Deal Comedy productions, and runs Alex vs. Men every Monday at Vauxhall Comedy Club.‘One of the most exciting new acts on the circuit.’ - Frankie Boyle

Originally from Canada, Bobby Mair is a uniquely talented stand up comedian that can set any comedy room ablaze. Winner of multiple comedy competitions, Bobby has opened for global touring comedians, including Bill Burr, Bill Maher, and Doug Stanhope.Since moving to the UK, he has established himself as a stand-out headliner with many TV appearances, including Roast Battle, 8 Out of 10 Cats and Russell Howard’s Good News. He was also the host of the reality horror show, Killer Camp, and starred in the reality sitcom, Bobby and Harriet: Get Married.

Our headliner, Alfie Brown, has a firebrand style of comedy that has been forged from years of pushing boundaries and experimentation. As seen on the Stand-Up Sketch Show, Life Lessons, Roast Battle UK & Harry Hill's Clubnite, Alfie’s impressive career to date includes taking a show to the Edinburgh Fringe every year since 2009. This year's show, 'Sensitive Man', has just won 'Best Show' at the Chortle Awards and is already critically acclaimed.

★★★★★ "It is tricky to write 350 sensible words when you come out a show simply thinking “Wow! F**k! Wow!’ " - THE SCOTSMAN★★★★ - THE TIMES★★★★ "Thrilling ... extremely funny ... a distinctive dissenting voice" - EVENING STANDARD★ ★★ ★ "All the potential to be one of this country’s best comics: perceptive, provocative, political, and playful. And, most of all, damn funny" - CHORTLE★★★★ "One of the most exciting comedians around" - BEYOND THE JOKE★ ★ ★ ★ "In an age when conformity appears to be a prime commodity, Alfie Brown creates work that is truly intoxicating and a boon to those who want their stand-up to actually mean something" - THE LIST★ ★ ★ ★ "Brown’s is one of the boldest new voices I’ve encountered... mapping a route to a different class of humour" - THE GUARDIAN★ ★ ★ ★"Breathtaking... a unique, provocative voice" - EVENING STANDARD★★★★ "Establishing himself as one of the gutsiest, most compelling voices on the comedy circuit" - TIME OUT★★★★ "Alfie Brown has evolved into an extraordinarily impressive comic" - THE SCOTSMAN

We cannot wait to see you there!

Follow us on our socials for more information about Quip Shed Comedy and all our upcoming gigs:

Age Restrictions:
This event is for people over the age of 18.

Please note that the line-up is subject to change. Old-Cranleighan Club members are eligible for discounted tickets; ask the Club for the promo code.Food and drinks available at the event.

Please bring your ticket confirmation email with you to the event.