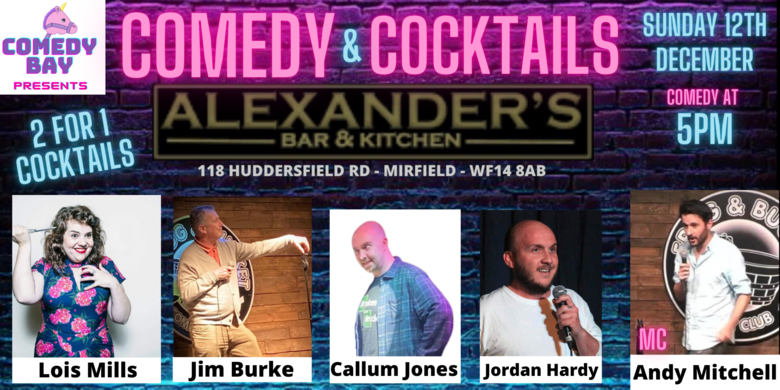 Comedy comes BACK to Mirfield ! Join MC Andy Mitchell (“The First Person That Has Made Me Laugh In Two Months” - Joe Exotic, Tiger King) and 4 top comedians for a night of Comedy & Cocktails!
About this event

Your acts at Alexander's Bar for the evening…


Lois MillsWinner of Sketch off 2018, Lois Mills is a one woman sketch group.
Using a mixture of puppetry, video and good old fashioned theatre, Lois will take you on a journey which will conclude with you thinking "Yep, she is a weirdo".
“She made a virtue of a the kind of behaviour that would get you sectioned without stage lights and a microphone" -Julia Chamberlain for Chortle
“The decidedly strange Lois Mills, who started off weird and… got weirder" -Bruce Dessau for Beyond The Joke
Jim Burke

After being banned several times for the repeated use of a word that - in Glasgow - is a term of affection, Jim has recently returned to Twitter as @barcajim3 (and now regularly uses the term '*redacted word*' in most of his interactions.

Jordans quick wit and piercing observations are only outdone by his misery and love to grumble. A true (simple)Yorkshire man who finds happiness in complaining.  If you like your glass half empty he's your man..

Callum has been described by many as "troubling" and "a danger to himself and society", however such glowing reviews haven't gone to his head and his feet remain firmly planted on the ground. He thinks his ultimate goal is life, liberty and the pursuit of happiness, but he's not entirely sure about that so usually just settles for something with salted caramel in.

"My client has no comment at this time" - Callum's Solicitor

Hosted and MC'd by Andy Mitchell


Age Restrictions:
Over 18s Only