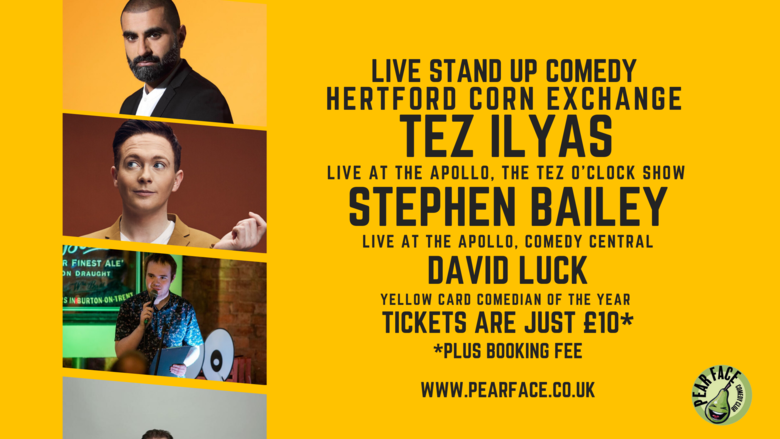 Pear Face Comedy and Hertford Corn Exchange are proud to announce our new bi-monthly comedy night. Showcasing the best in stand up comedy.

Two TV headliners and support for just £10 plus booking fee.

TEZ ILYAS
★★★★
"Tez Ilyas’s political stand-up is candyfloss with a razorblade inside: sweet and familiar at first, then shockingly, painfully sharp. It’s the kind of manoeuvre that takes serious talent to pull off."
THE TELEGRAPH
★★★★
"Ilyas has a slickness more reminiscent of US comics, and the gags to back it up, though his most prized asset could yet be his bold, subversive streak."
THE GUARDIAN
★★★★
"Radiantly entertaining"
THE TIMES
Tez Ilyas is one of the most celebrated rising stars in British Comedy.
Tez has appeared on Live at The Apollo (BBC Two), The Last Leg (C4), Mock the Week (BBC Two), Live From the BBC (BBC Two), Man Like Mobeen (BBC Three), Live from the Comedy Store (Comedy Central), Kevin Hart’s Live from Montreal (LOL Network), Virtually Famous (E4), The Now Show (BBC Radio 4), starred in both his own Channel 4 comedy Blap Bounty – whichbecame the second most watched show in the format’s 10 year history – and fronted his own satirical sketch series The Tez O’Clock Show, to huge critical acclaim.

Live at the Apollo, Comedy Central, Celebs on the Farm, Celebs on the Ranch.
Stephen Bailey is a comedian, presenter, television personality and writer, whose friendly and open brand of gossipy humour has made him one of the UK’s most exciting up-and-coming acts in comedy at the moment.

Think Milton Jones, Tim Vine, Stewart Francis and you'll have some idea of how funny this guy seems to think he is.

Tickets are available directly through this event page or via www.pearface.co.uk or www.thecornexchange.org.uk

Please note with all our events the line up maybe subject to change. For full T&C’s please visit our website.