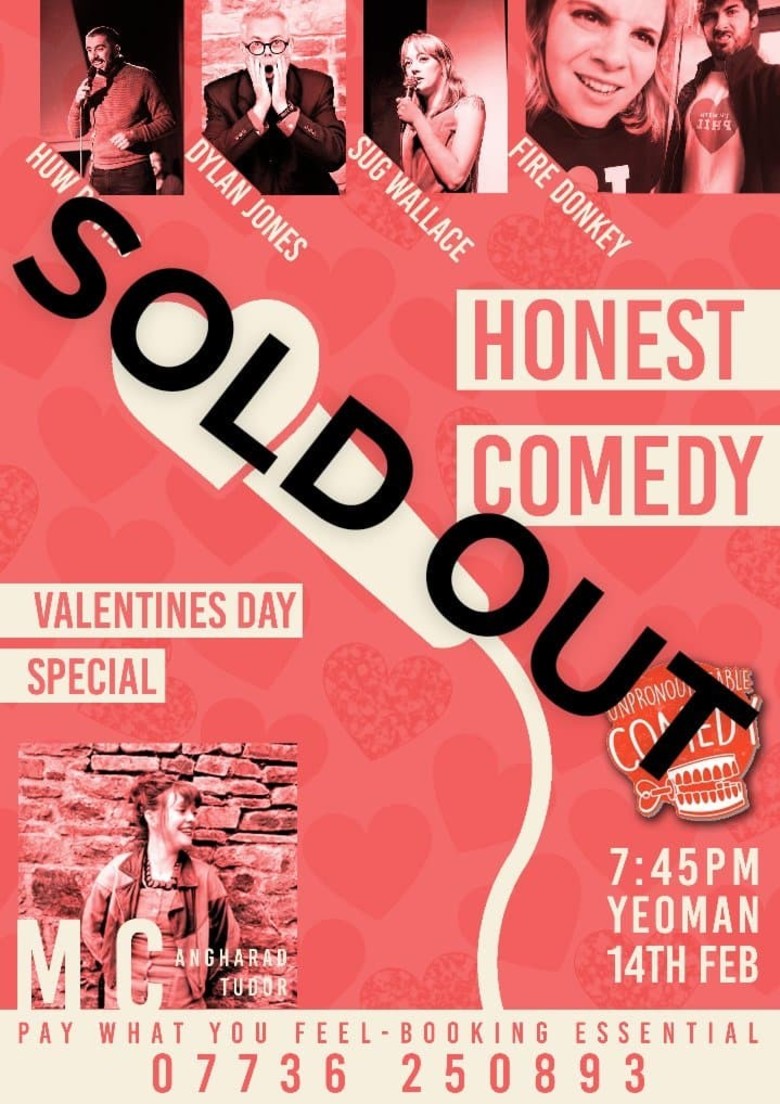 Unpronounceable Comedy's sell out monthly pay what you feel Honest Comedy Club is back at the Pembroke Yeoman for a Valentines Day special!
Bring your dog, you mother, your part time lover, or just yourself to enjoy valentines day a little bit different this year.

DYLAN JONES - A self-styled “Miserable Welsh Git”, Dylan Jones is a playful, subversive comic writer who's assured delivery allows him to navigate the most treacherous topics. A strong, audience focused performer who's daring style ensures that no two live events are the same while making sure that all of them are memorable.

SUG WALLACE- Sugar by name, bitter by nature. Distinctly South Welsh, "ooh Matron" comic Sug is trialling her new interactive comedy alongside some filthy, sour Valentine's material. Think Patsy from Ab Fab meets Adrian Mole, but if he moonlighted as a Netto brand Belle de jour? You'll want to be the chosen one to read her diary entries. Is this character comedy? You'll never know..."

HUW DAVIES - Stand up comedian, based in Newport, the city of spice and broken dreams. Talking all things domestic bliss and how much he loves his best. As seen in Cardiff Glee Comedy Club and a regular face in the South Wales's comedy circuit.

FIRE DONKEY PRODUCTION  - Fire Donkey are a absurdist multimedia alternative comedy theatre group aiming to entertain through a series of weird presentations, contemporary dance, puppetry, music, and generally making stuff up and seeing how far they can stretch out a joke.

ANGHARAD TUDOR - MC for evening is the quirky whirlwind  of a woman, Angharad Tudor Founding member of  Unpronounceable Comedy her comedy sketches on her upbringing in coastal wales on BBC Sesh Wales has had over 1 million views and has been shared multiple times on BBC Comedy.


Line-up subject to change, unfortunately we are unable to provide refunds.

Tickets are limited so to avoid disappointment you can reserve a seat now for £2.50

Line-up subject to change, unfortunately we are unable to provide refunds.
Tickets are limited so to avoid disappointment you can reserve a seat now for £2.50
PAY WHAT YOU FEEL CASH ONLY ON THE NIGHT AFTER TICKET RESERVATIONS