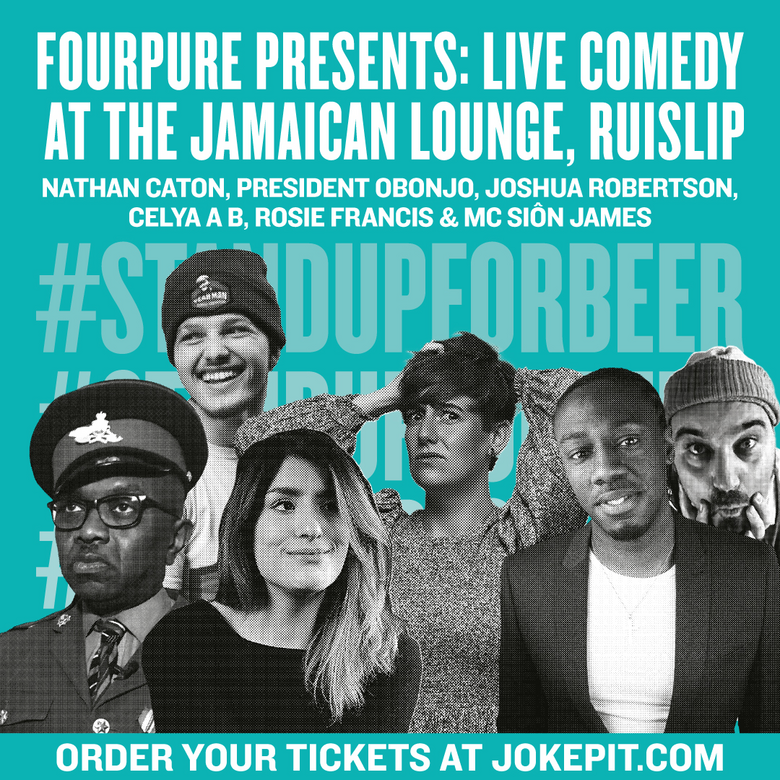 Collywobblers Comedy are very excited to bring a new comedy club at The Jamaican Lounge Ruislip.

The Jamaican Lounge is a lovely, friendly neighbourhood Jamaican restaurant which turns into a cool Carribbean bar in the evening,

Food is available , Please arrive for 7pm for pre comedy dining as food will only be served up to 7.45pm.
Alongside Fourpure beer a selection of tasty Jamaican cocktails are on offer to enjoy

President Obonjo
President Obonjo has been performing stand up for the past 10 years. He is a larger-than-life, uber-confident, self-appointed, side-splitting dictator of ‘Lafta Republic’,he has been leading a covert comedy revolution to become the first President to take the UK comedy industry by storm. His previous solo show President Obonjo Stole My Identity was performed in 2015 at Bath Comedy Festival, Brighton Fringe and Edinburgh Fringe Festivals in 2015 and 2017 to packed crowds and critical acclaim.
'President Obonjo has everything you’d expect of a tinpot African dictator… a great comic construct' (Chortle.co.uk).
'A fascinating, bewildering and painfully funny experience' (FringeGuru.com).. #justiceforobonjo

Joshua Robertson
Joshua was involved in a motor bike crash when he was 11 years old and was pronounced dead at the scene. He spent 4 months in a coma and now lives with a physical disability. Joshua is a dynamic and diverse multi award winning comedian and is a star of BBC3. and has performed around the world from Australia to New York City. Josh’s self-deprecating, edgy humour covers life as a disabled person – from everyday reality to dating and sex. Josh tackles the thorny aspects of disability, from the tame to the outlandish. Come and check out ‘The Diz-abled Gangster’.

Rosie Francis
Rosie Francis mixes anecdotal with the absurd to bring you her unique reflections on life.

Mark Dolan ( replaces Celya AB)Best known as host of Channel 4’s iconic comedy series 'Balls of Steel', Channel 4's The Jump, C5’s The Cars That Made Britain Great, C4’s TV’s Greatest Detectives and C5’s The Best Of Bad TV, some of which he admits to being responsible for'Consistently funny' (Independent) 'The audience are left gasping for breath, such is the laughter in the room' (Sunday Express)
MC Sion James
"Utterly charming ... Lovable giant' Time Out London