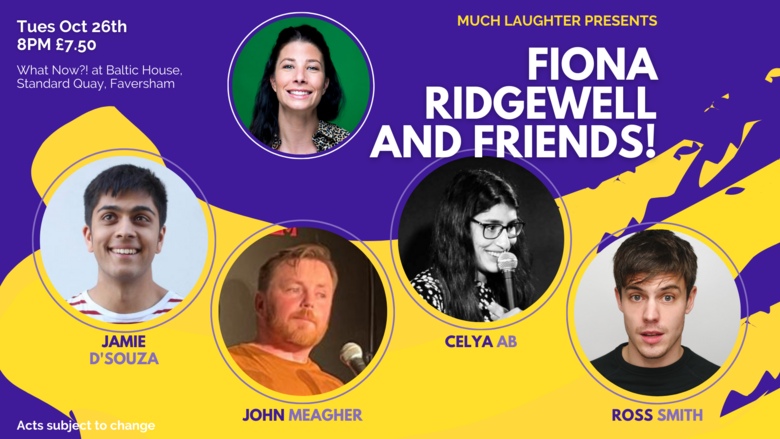 Top comedian Fiona Ridgewell introduces her favourite acts to Faversham! Fiona was a finalist in Funny Women 2020 and in February of last year her show Contender was nominated for best debut show at Leicester Comedy Festival.

"Fiona Ridgewell has funny bones and an easy warmth on stage" – Julia Chamberlain.

Jamie D'Souza has quickly established himself as a rising star on the comedy circuit. He has reached the finals of the prestigious So You Think You’re Funny? and The Musical Comedy Awards, as well as being shortlisted for the BBC New Comedy Award. Jamie was also the runner up at Hastings Fringe New Comedian Of The Year.

Jamie’s stand up has been described as a mix of short stories and one liners, delivered with an instant likability and an understated confidence. Covering a range of topics including veganism, his mixed race heritage and coming to terms with entering adulthood. Coming from a musical background, he is adept at both straight stand up and musical comedy.

Jamie has appeared on the BBC Asian Network Stand Up Show  and featured on the iPlayer and Comedy Central at the Edinburgh Fringe. He currently performs at many clubs all across the UK, including The Comedy Store and Up The Creek.

"Great timing, great presence and punchlines. A much needed fresh comic voice from Northern Ireland at a time when we most need to hear it" - Jarlath Regan, An Irishman Abroad podcast.

"…grabbed the gig by the scruff of its neck with a loud, fast and punchy delivery" – Steve Bennett, Chortle.

Celya Ab is one of the most unique emerging talents on the UK circuit. Originally from Paris, Celya now resides on the sunny side of Birmingham and has been making a huge impression on the UK comedy scene despite only starting her career in 2017. Able to perform in French and English, Celya's writing is sharp and her stage presence likeable and warm.

Celya has recently been awarded the Birmingham Breaking Talent Award 2019 as part of the Birmingham Comedy Festival and was a Finalist for the National Funny Women Awards competition. As seen/heard on Union Jack Radio, BBC WM, Brum Radio , and Birmingham TV.

"Both classy and funny. A thoroughly engaging presence and very promising writer who seems to know her place in the world. Strong stuff." - Steve Bennett, Chortle.

"A strong end to the night" – Bruce Dessau, Beyond The Joke.

Since he started gigging in 2015, Ross Smith has taken the comedy circuit (and the internet) by storm. He's a regular at some of the capital's biggest comedy clubs. His personable, relaxed style and contemporary material, underpinned by clever wordplay and self deprecating humour, has made him one of the country's most exciting emerging acts and quick-witted hosts.

In 2018, he made headlines around the world when he agreed to go on holiday with complete strangers, taking the place of another man called Ross Smith. His viral adventure and the aftermath is the subject of his debut Edinburgh show, I Am Ross Smith.

His second critically acclaimed show Crying/Shame (2019) boasted two of Dave's Top Ten Jokes Of The Fringe alongside a plethora of fantastic reviews.

"One of my favourite acts"  – Joel Dommett