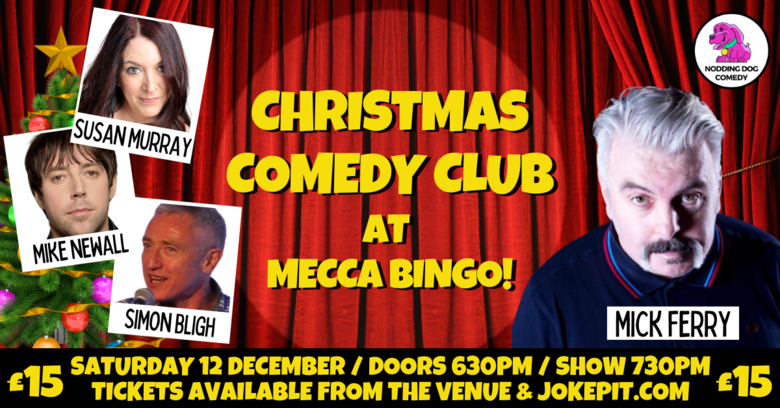 Comedy At The Bingo!

Comedy At The Bingo!

Join us for an incredible night of stand-up comedy at Mecca Bingo Crewe, as we present 4 of the finest acts from the UK comedy circuit!

Susan Murray is your host and compere for the evening! Susan has emerged as one of the best female stand-ups in the UK and was the first ever woman to MC Decompression gigs for the British Army. She is in the top 100 Huffington Post funny women Tweeters.  She’s wrote for and was a guest on Jeremy Hardy Talks To The Nation and has also starred in Stephen K Amos’ Idiots Guide both for Radio 4. She has penned 4 successful solo shows at the Edinburgh Festival as well as performing in several comedy plays and sketches.
"Her ability to make quirky connections allows her to build a compelling believable and richly funny picture of 21st century womanhood..Anyone who loves the work of Sarah Millican and Kerry Godliman will find plenty to enjoy here" The Guardian

Simon Bligh has been a Comedian for over 25 years, has received the Time Out Comedy Award and a nominee for the Perrier Award, making him one of most in demand acts. After watching a Richard Pryor film as a 15 year old boy, he realised his true calling is to be professional stand – up comedian. Bligh has never looked back since that very day. His stage persona engages audiences in a high energy, fast moving delivery, with hilarious storytelling and the best observational humour available. His unique style of stand – up has led him to perform all over the world including Hong Kong, USA, Malaysia & Thailand along with the most of Europe. A highlight for Bligh’s long established career was to perform for the UK military in Kabul, Kandahar and Camp Bastion. On TV Simon has appeared on numerous programmes including The Stand – Up Show, Saturday live & Alan Davis Teenage Revolution. "The funniest Comedian I've ever seen" Alan Davis

Mike Newall came to the public eye in this years Britains Got Talent series, receiving 4 yes's from the judges! However, he has been recognised on the comedy circuit as a brilliantly original act for much longer than that! With his relatable material, 'everyman' persona and cheeky grin, Mike is in huge demand with all the major UK comedy clubs. This is observational comedy at its best with razor sharp timing combined with a keen sense of dark sarcasm. He most recently appeared on Britain’s Got Talent where he impressed the judges so much that Simon Cowell said..it was like an Oasis concert where the music ran out and Liam decides to tell a few jokes!"Perfectly crafted … Pin sharp, his control is deft and his hair is immaculate." The Scotsman
Mick Ferry  is one of the most sought after comics on the British and International comedy circuit. He performs regularly at The Comedy Store in London and Manchester as well as headlining at comedy venues nationwide. On our TV screens, Mick has recently starred in BBC One`s Michael McIntyre’s Comedy Roadshow as well as Comedy Blue and The Comedy Store for Comedy Central. He made his big screen debut in 2009 in Ken Loach’s Looking For Eric – a hit feature film at the Cannes film festival where it was nominated for the prestigious Palm D’Or. A prolific writer, Mick was a writer on John Bishop’s Britain for BBC One and has also previously written for BBC3`s Smalltime.
"See him or regret it!" John Bishop
"Keeping the art form of the belly laugh alive, Mick Ferry is not an act you should miss!" The Mirror *****

An amazing night of entertainment just when we need a laugh more than ever before!

Tickets are bound to be in huge demand priced at just £15! However should the show not be able to go ahead due to regulations in place we will offer a new rearranged date that they will still be valid for!

Please conform to all COVID-19 regulations that will be in place and don't forget your face mask!

Line-up subject to change. Should show be cancelled due to COVID19 we will offer you a new date and tickets will still be valid.