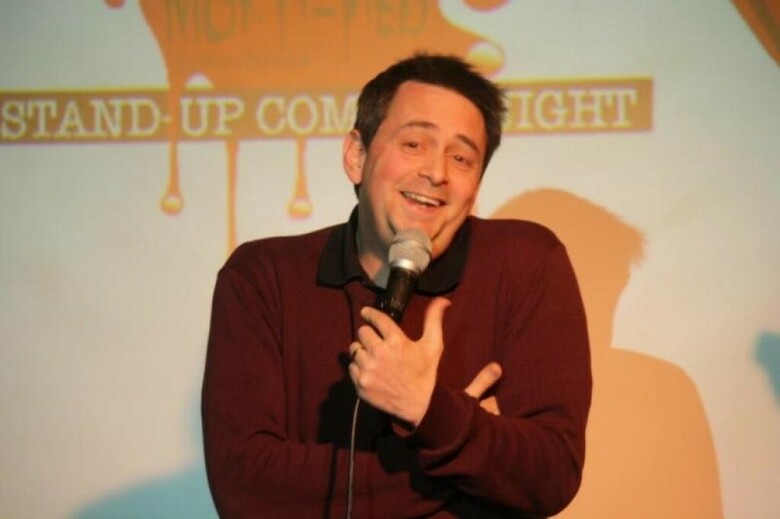 Clwb Comedy returns to the District Club with another fantastic night of hilarious stand up comedy.

This month, we are joined by Philip Simon!
Writer for:Mock the Week, Newsjack  & Newsrevue​Production team for:Mock the Week, Taskmaster The Imitation Game​WINNER of the Jewish Comedian of the Year 2015WINNER of the Lastminute Comedy Comedian of the Year 2015
Philip is one of the most sought after comperes and opening/closing acts working on the UK comedy circuit today. He gigs throughout the UK, as well having performed as far flung places as America, Scandinavia, Europe, The Middle East and New Zealand where he headlined at The Classic in Auckland.Philip has also performed at a number of corporate events and private parties, and runs a team of acts performing fundraisers for school PTAs, charities and other organisations.
'Philip Simon is never less than hilarious.’
(The Stage)
'With Philip Simon as compere comedy is guaranteed.'
(The Jewish Chronicle)
'He’s good!’
(Kate Copstick)
'Solid, strong stand-up. A Comedy Store act...Definitely one to be reckoned with.'
(Hils Jago, Amused Moose)
'A polished performer who makes everyday subjects funny, even though we sometimes may be embarassed to laugh at his subject 'matter. Excellent stuff...Superb stage presence, very professional and a little bit naughty!'
(Alan Sellers, Great Comedy Nights)
'A delightfully polished performer with a flair for observational humour. His twisted take on the everyday has seen him become established as a darn fine opening act with a laconic delivery that is a joy to behold.'
(Anthony J Brown, Stage Fright Comedy)
'Philip Simon’s set is a joy. A wry observation of life as a nice Jewish boy...Very funny indeed.'
(Cotswold Comedy Club)
'Big consistent laughs. I was impressed with how well Philip played the room and how professional he was on and offstage'
(Bobby Carroll, Comedy Knights)
'Philip was without doubt the act of the night - his crowd work was relaxed and confident and he extracted two applause breaks within his ten minute set.'
(Ray Davis, Court Jesters Comedy)
'Philip Simon is fast earning a respected reputation on the comedy circuit as one of the leading newer comedians. His relaxed style of performance coupled with his hilarious observations have been a winning combination with audiences across the country.'
(Miles Crawford, JokeKlub)
Support on the night comes from...

Her solo stand up show Bad Mother… was a hit at Edinburgh and Brighton festivals. Directed by Foster's Comedy Award nominee Thom Tuck, it received 5 star reviews and was The Times’ Critic’s Choice.

ANDREW WHITE
“One of the most talked about rising star comedians” (Essex Magazine), Andrew White is a comedian that is not to be missed. From charity shop rants to stories growing up gay in rural Salisbury, Andrew has made a reputation for himself with his sharp writing and “rampantly engaging” (The List) performances at some of the country’s top comedy clubs, festivals, and corporate events.

Writer for Mock the Week, Comedy Central, Newsjack, and Newsrevue

“One to Watch” (Chortle)


All held together by our wonderful host;

Great venue in Pontypridd District Club. All of the acts were great fun and engaging. I agree with a previous comment on straight rows. Maybe something a bit more informal?

Great night of laughter. Daniel Glyn and Chris Chopping were excellent replacements for Meryl and Andrew who were unable to attend. Phil Cooper is an excellent MC, the headliner was fantastic too. Well worth the trip there.

Great evening, great place, staff very friendly and efficient. Tables in rows? Might have been better to have had them at angles to create more atmosphere. Altogether a fab evening. Well worth it.