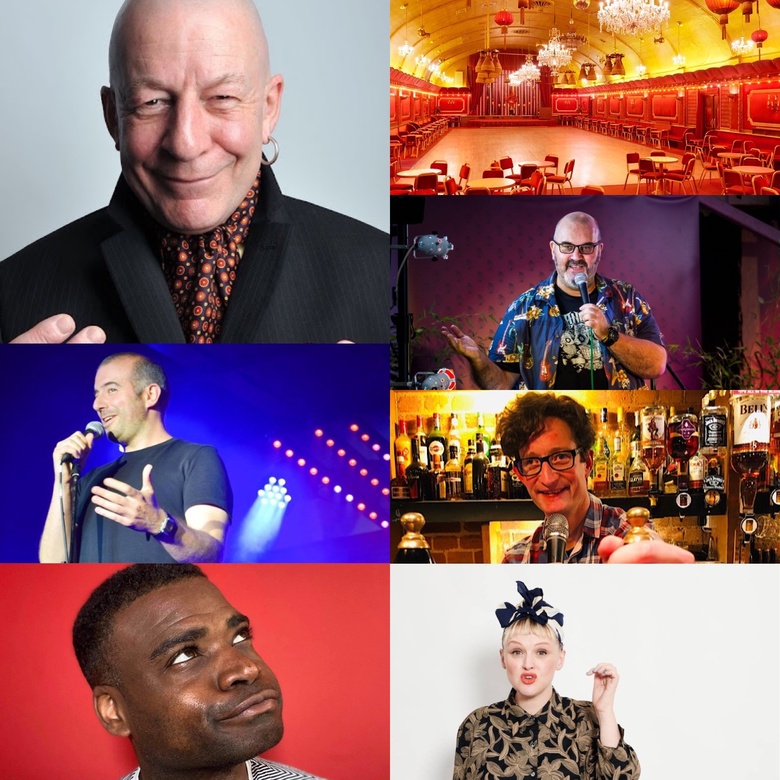 Thursday is the new Friday!

Come enjoy great live comedy from stars of TV, Radio & Stand Up comedy circuit in a friendly atmosphere at an iconic ballroom location and have a laugh and help raise funds for a worthy charity!

Dave Moss, Sharon Jackson (Much Laughter) combined with Happy Mondays Comedy bring you a fantastic line up of comedy talent including current British Comedian of the Year Jeff Innocent, Britain’s Got Talent’s Semi Finalist Stefano Paolini, comedy veterans Hatty Ashdown and James Dowdeswell, plus up and coming rising star Roman Harris and your cheeky charming MC Sion James at the iconic Rivoli ballroom for a Comedy Charity Fundraiser for The Working Together Trust.

Price - £10 (early bird price), £15 on the door. The artists will be waiving their usual fees, and the event will raise money for The Working Together Trust, which helps disadvantaged children in the community

The Rivoli Ballroom is a star itself, historic venue as featured in Killing Eve, Tina Turner's Private Dancer video and the likes of Oasis , The White Stripes and Kylie have played there.

Please email mossy36@hotmail.co.uk so we can reserve you seats together if booking or groups of 3 or more.

Including Interval and your favourite tunes played by Tall Order Entertainment.
Plus Fundraising Raffle so please bring cash for donations and chance to win


Jeff Innocent:
Comedy Store Headliner & Cockney Philosopher. Current British Comedian of the Year, headliner Jeff has become  a firm favourite on the circuit after making audiences laugh for over 20 years

"It should be made law that every British Citizen must go and see Jeff Innocent. He's that funny."  Evening Standard
He is described by The Guardian as a comedian with, 'The body of a nightclub bouncer and the brain of a university boffin.'

Stefano Paolini:
South London Comedian & Impressionist Stefano reached the semi finals of the latest Britain’s Got Talent . His impressions and comic timing are second to none; a well established favourite on the circuit.
"Never fails to please a crowd" Chortle.co.uk As seen on BGT , Channel 4's Double Take and BBC Radio 4's Dead Ringers. "the best voice merchant on the circuit is Paolini " Evening Standard


Hatty Ashdown
Fresh from her success at the Edinburgh Fringe with the ‘Worry Drawer’ , she has a lovely down-to-earth manner, full of comedic practical advice with how to deal with your worries and beyond! “Wonderfully inventive, consistently funny”- Time Out. "Innate funny bones" Chortle
Co-writer of Comedy Central's Give out Girls, host of Soho Radio's Funny Mummies.

James Dowdeswell
Local lad and beer connoisseur, James performed at the Rivoli ballroom last November to great acclaim, and will keep you entertained with comic tales.
Appeared on Russell Howard’s Good News (BBC), Celebrity Deal Or No Deal with Jimmy Carr (C4), Ricky Gervais’ Extras, The World Stands Up ( Paramount Comedy) “James Dowdeswell is a real master of the comedian’s craft.” Chortle.co.uk
James has published a CAMRA recommended book about his love for pubs "The Pub Manifesto: A Comedian stands up for pubs"

Roman Harris
Another success from this year’s Edinburgh Fringe, this up-and-coming comedian is one to watch. He is in the final of The Stand Up club’s ‘Get up, Stand up’ competition.  Winner - The Blackout at Up The Creek
“Roman Harris delivers observational, quirky and sometimes edgy comedic tales of life as he sees it”

Great night out. Thank you.