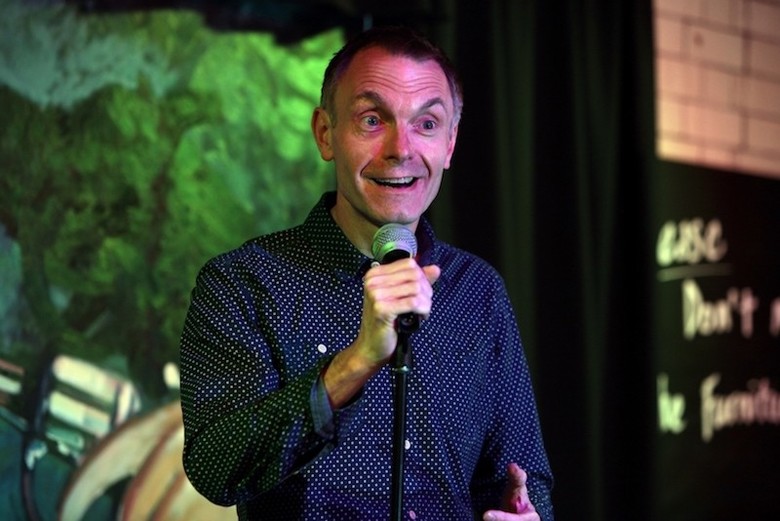 Mike has a wealth of experience on both the national and international comedy circuits, delivering his delightfully sharp observations and quick wit to audiences from South Shields to Singapore. Equally at home at regular comedy nights, after dinner speaking, and more recently kids comedy clubs.Mike has performed to sold out shows at the Newcastle Comedy Festival and regularly performs [sets and compering] at The Stand, Hyena Comedy Cafe, and Jongleurs. As an after dinner speaker and entertainer, Mike provides a successful blend of material and audience interaction that can be tailored to the needs of most events or clients, and a delivery that will ensure the crowd remember the night for a long time.On the after dinner circuit, Mike has worked with Kate Adie, Rory Underwood, Bruce Grobbelaar, Alan Kennedy, and Norman Whiteside, to name a few. He has also hosted a celebrity snooker match between national champions John Higgins and Graeme Dott.

Mike writes a popular weekly column in the Evening Chronicle (Newcastle) that he is currently adapting into a solo show. As a writer and performer Mike has worked on Spender, Byker Grove, and various Catherine Cookson dramas. In addition to providing the famous voiceover for Viz Comic’s Sid the Sexist DVD and in the flesh at Newcastle City Hall, Mike recently appeared in the hard hitting and award winning Ken Loach movie "I, Daniel Blake".
Opening Act is

KEITH WILD
Back by popular demand, Keith brings his very funny (and rude) songs to Bradford once more .... along with that crazy laugh!

“Whilst some guitar acts hide behind their instruments, Keith absolutely utilises his as a weapon of mirth.His songs, audience interaction and cheekiness never fail to get the audience singing along and, more importantly, pissing themselves laughing"- The Comedy Station, Blackpool
Plus support from

Doors from 7pm - get down early for plenty of drinks.
Show starts bang on 8pm.  We will try our best to sit large parties together but can't always guarantee this.
Line up subject to change.
Late bar and music following the show so stick around for a drink and a dance.