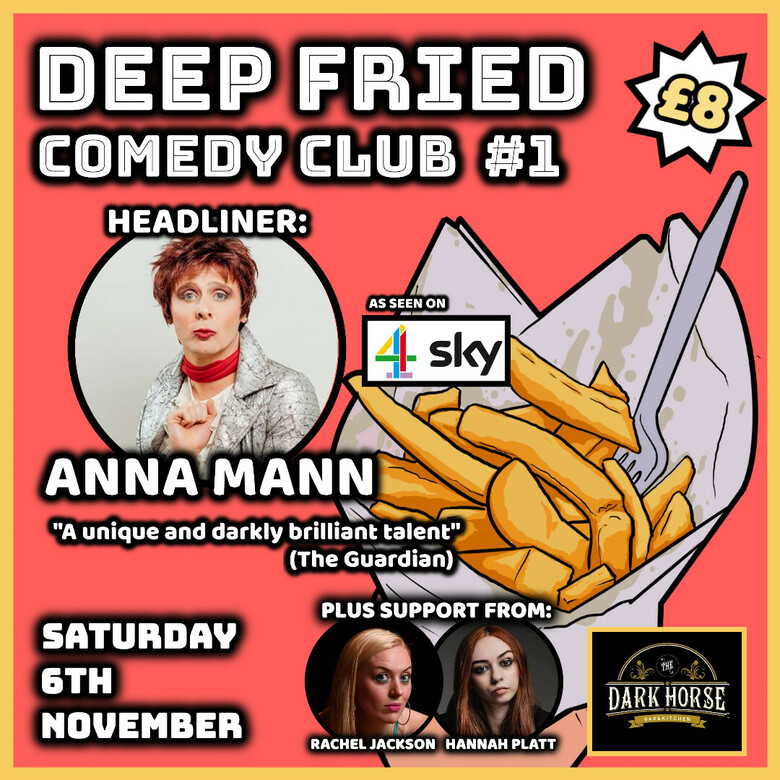 Anna Mann is the self-proclaimed ‘greatest actress of her generation’ she is visceral, real, incredibly brave, rather raunchy and utterly deluded.

The latest comic creation of award-winning character comedian Colin Hoult (Murder in Successville, Being Human, Derek, Life’s Too Short , BBC Radio 4’s Carnival of Monsters) ANNA has appeared in two shows at the Edinburgh Fringe, both in the top ten best-reviewed shows of the year. She has since filmed ‘Anna Mann’s Valentine’ and ‘Inside Your Ancestors’ for Sky and appeared on the ‘Russell Howard Hour’ and ‘Harry Hill’s Club Nite’. She regularly appears in her sell-out late-night show at the Soho Theatre ‘Anna Mann’s Cheese and Sex Party’.

She is an experience like no other that gets the whole audience involved. Prepare for a saucy, silly and extremely funny romp!

Rachel is an award winning Scottish actress, comedian and writer. Winner of The Herald Scottish Culture Award ‘One to Watch’ prize in 2019 and nominated for best new comedian at The Scottish Variety Awards and The Scottish Comedy Awards.

“Jackson is a genius behind the microphone, deserving of every success she encounters” ⋆⋆⋆⋆ (Edinburgh Festival Magazine). “Unstoppable tour de force” (The Daily Record)

Hannah is a stand-up comedian, writer and Finalist of the BBC New Comedian of the Year Award in 2019. Merseyside-via-Manchester's finest misanthrope has already been making her mark as a comic, never shying away from sensitive topics with brutal honesty and quick wit. Recently she has been commissioned to make a Laugh Lesson for BBC3 and written on Newsjack for BBC Radio 4.

“A voice of a new generation” (The Skinny). “Distinctive, and she feels like a voice with something to say” (Chortle)

Good Kids are bad people but good comedians. They're daft, weird and lairy. They have been taking the Midlands and wider UK comedy scene by storm for the last couple of years and have been nominated for a bunch of awards. Kieran is the curvaceous one and Tom is the other one. Best Alternative Act Midlands Comedy Awards 2019, Nominated Leicester Comedy Festival Best Musical Show 2020, Nominated Leicester Mercury Comedian of the Year 2020

“They’re stupid, daft, at times nonsensical. Funny yes but daft as brushes. Just how I love my comedy. Thank the stars they went into stand up and not health care.” (Johnny Vegas). "A really fab little sketch act." (Joe Lycett)

A many limbed whir of musical might. Forged in the fires of Digbeth practice rooms and trained at the conservatoire of life. Expect some nonsense tunes from Moseley's Finest (only) comedy house band.
“I wouldn't be here today if it wasn't for the English Haircut sound." (Elton John)