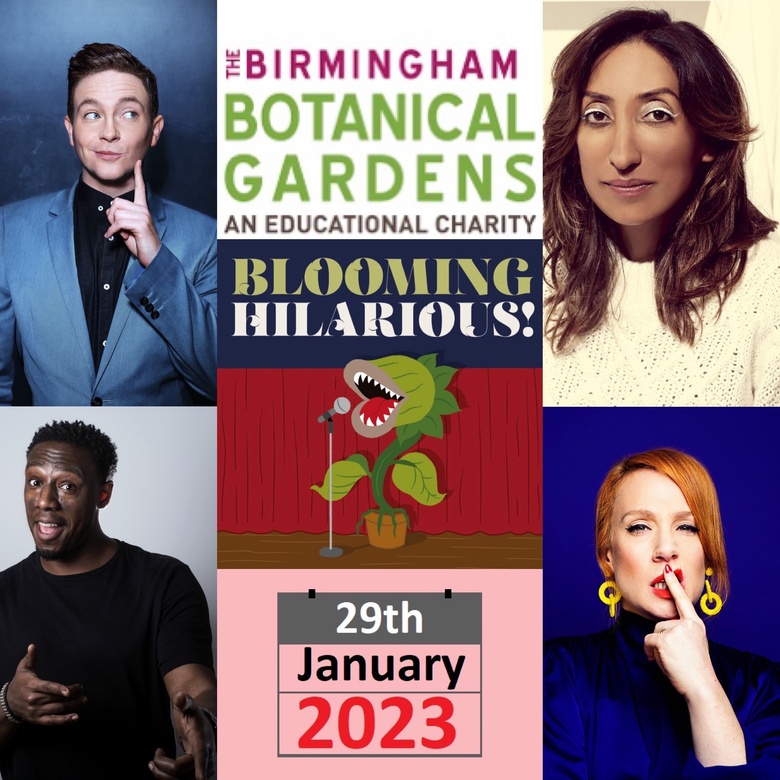 🌟A Blooming Hilarious Line up!

The Gardens are pleased to present a night of entertainment, laughter and fun with our new comedy night! Welcoming to the stage a diverse line-up of tv-stars including; Shazia Mirza, Nathan Caton, Sara Barron and your MC for the evening, Stephen Bailey, who will all 'leaf' you wanting more!

We have a fantastic line up of comedy talent fantastic including the wonderful comedy stars of comedy circuit legend and star of tons of TV Shazia Mirza - As seen on BBC's 'QI' & "Have I Got News for You" C4's 'Celebrity Island with Bear Grylls', ITV's Jonathan Ross Show, and C4's Travel Man, BBC2's "Pilgrimage" providing the lols, Nathan Caton (Live At The Apollo, Mock The Week, Russell Howard’s Good News), Sara Barron- As seen on BBC's Live At The Apollo , Frankie Boyle's New Word Order, Would I Lie to You? & Comedy Central's Roast Battle all hosted by your cheeky charming MC Stephen Bailey hilarious Stephen Bailey ( Live At The Apollo, Celebs on the Farm ) in the beautiful surroundings of the Birmingham Botanical Gardens Terrace suite with a fully stocked bar to quench your thirst..

Book your tickets in advance online by clicking the link below :

Our Brilliant Comedy Line up :

'Wonderfully life enhancing... Her laconic one-liners represent something quite unique in modern comedy' (The Guardian).

MC / Compere : Stephen Bailey
Stephen Bailey is a cocktail of class, caring and comedy, with the most flamboyant umbrella to top it all off. Comedian, presenter, actor and writer, Stephen Bailey is a proud northern, working class, gay man.The multi-award nominated star’s indecorous brand of gossipy humour has singled him out as one of the UK’s most sought-after talents for comedy and all things showbiz/entertainment. Star of BBC's Live at the Apollo, ITV's Zoe Ball on Saturday, BBC1's Unbreakable, Celebs on the Farm (Channel 5), Celebrity Mastermind, E4's Celebrity Coach Trip & Love Island: Aftersun and much more!

*contains adult content & some rude language , diverse themes and of course will be blooming hilarious!

Acts shown are correct at time of going to press, in the unlikely event that an artist needs to cancel, we reserve the right to change the line-up without notice."

*contains adult content & some rude language , diverse themes and of course will be blooming hilarious!

Acts shown are correct at time of going to press, in the unlikely event that an artist needs to cancel, we reserve the right to change the line-up without notice."