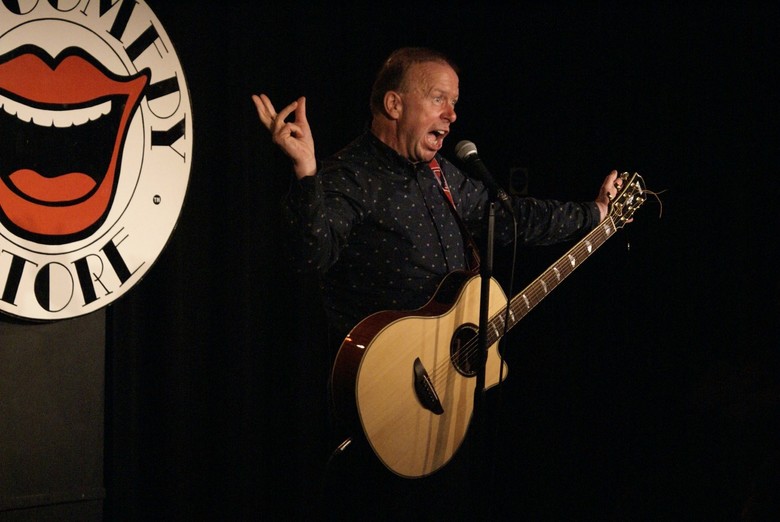 Steve Gribbin is a scathingly satirical Scouse song-thrush whose skilful skewering of topical idiocies has made him one of the most in-demand acts on the British and worldwide comedy circuit. Like a cross between Billy Bragg, Danny De Vito and George Formby, Steve specialises in musical topical political comedy, the more biting and bitter, the better.

Like an unrepentantly gleeful comedy imp, Steve sinks his teeth into everyone from Huwawei (but they already knew that), Prince Andrew (“what first attracted you to this billionaire paedophile?”), Boris “Children? What children?” Johnson, Nigel Farage, Elon Musk, Futile Space Missions, People who wear trainers with smart trousers,  cats, VAR, Evertonians and Kim Jong-Un’s Fashion Consultant.

He covers many musical styles, from the Velvet Underground-ish druggy drone-rock about our biggest addiction “Sugar (Just Gimme Some)”, to the Fundamentalist Hip Hop of “The Slack-Eyed Jihadis”. Plus his late middle-aged take on “Fifty Shades Of Grey”, the filthy jazz bossa nova of “50 Shades of Off-White Socks”.

First gig:
I have been gigging as a solo act since 1994

Press, Quotes, Awards:
Jan 2018 Winner of The Comic's Comic Award For Outstanding Achievement as voted for by his fellow comedians
“Steve Gribbin has all the manic energy of a friendly Tasmanian Devil…spot-on and hysterical”
**** THE SCOTSMAN

“A comic animated by proper passion…a trenchant treat…excellent!” THE GUARDIAN

“Steve Gribbin stormed the stage, and had the audience roaring with laughter from start to finish…a real class act”
THE INDEPENDENT