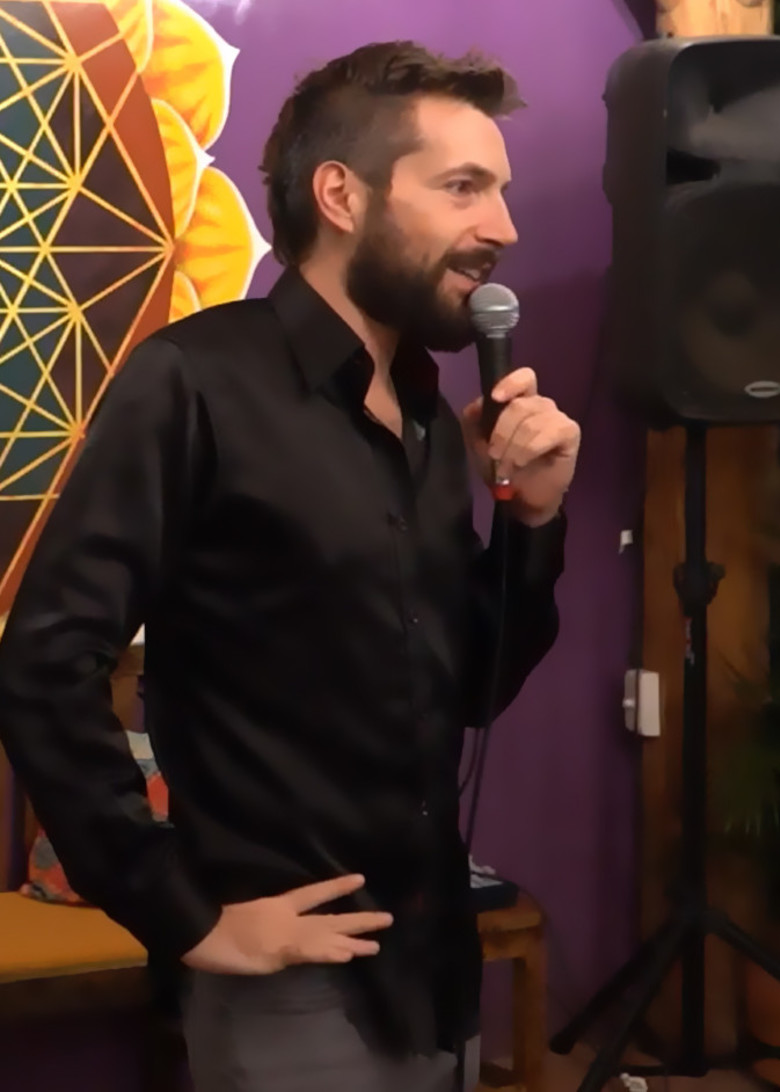 Alex hails from Toronto, Canada and has gigged in Toronto until he came to the UK to visit his friend in September 2001. He was blown away by the massive comedy scene there, and found himself at home amongst English countrymen. After a couple of subsequent visits, Alex moved to London in September 2002 and then spent the better part of a decade building his skills all over the UK, honing his skills alongside all the top comics. Alex has opened for some of the top acts on the Global Comedy circuit, including:

In 2006 Alex got into self improvement and in 2008 he started Sasha Dating Systems to help men overcome their anxiety, improve their charisma, and form fulfilling personal relationships. He has personally coached thousands of men across five continents, as well as creating a cult following via his YouTube channel with over 10 million views.
​
In the last few years, Alex has discovered that he loves nothing more than inspiring men to create extraordinary lives by challenging societal and parental programming. He encourages men to break out of the matrix and start living life on their own terms. He regularly speaks on a wide range of topics including health, purpose, entrepreneurship, and relationships.

In 2015, Alex Lasarev created 'Comedy Therapy' by accident. In his own words:

"I was participating in one of Steve Pavlina’s workshops. It was a crazy workshop that was purposefully unplanned. All about trusting the universe and going with the flow!

I offered to teach the participants how to perform stand-up comedy. They were keen, and we went for it.

I shared my own story, told a few jokes, and showed the group how to discover the comedy gold in their lives – specifically in the challenging moments that they’ve been through.

I gave everyone the opportunity to share part of their story to the group. At first only a couple of people volunteered, and they did great. As the night went on, more and more people shared, until eventually everyone had shared a bit of their story.
Everyone was funny… And finally we were able to see the value of sharing our experiences - even the ones we thought were better left unsaid!

Not only was it EXTREMELY funny - the healing experienced by the group was profound. Sharing their shit was so relieving and freeing! EVERYONE laughed their asses off – not only at everyone else’s traumatic, fucked up lives, but at their own! It was like a HUGE weight off their shoulders. Everyone felt it.

I realized that I was on to something… And comedy therapy was born!

After my “fluke” teaching comedy therapy in 2015, something moved in me. I had felt the power of this authentic self expression, and I knew this was something I wanted to bring to the world!

First gig:
Started stand-up back in 1997 in Toronto, Canada

Press, Quotes, Awards:
"Hilarious... By the end, you are gasping for breath" - Three Weeks
“Routines are on the money, and delivered with Laser guided accuracy” – Chortle.co.uk
FOUR STAR **** "Outrageously, achingly funny" - BBC.CO.UK